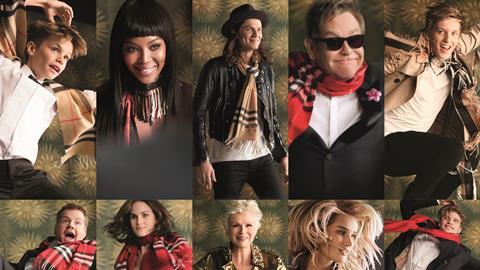 A three-minute film, to be released online at 7pm today, pays tribute to the hit movie and musical Billy Elliot.

The ad features the celebrities recreating the opening jumping sequence from the original film, released 15 years ago.

Julie Walters starred in the original Billy Elliot film and Sir Elton John wrote the music for the musical.

The video will appear on Burberry’s website and social media platforms.

It will also feature in cinemas during screenings of the new James Bond film Spectre. A Burberry spokeswoman said there is no plans for it to appear on TV.

Stills also featured as part of the campaign have been shot by photographer Mario Testino.