Business rates income in Great Britain is forecast to exceed council tax for the first time in 10 years in 2015. 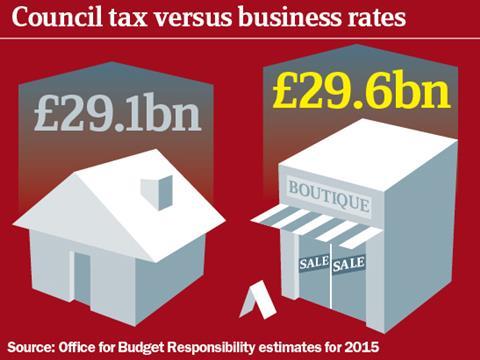 Figures, to be highlighted as part of the Grimsey Review of the high street next week, show business rates income across all sectors is expected to hit £29.6bn in 2015. The BRC estimates retailers will pay about 28% of the total.

Council tax revenue is forecast to reach £29.1bn, according to data from the Office for Budget Responsibility.

Turner-Mitchell said: “[Secretary of State for Communities and Local Government] Eric Pickles’ department has gone to great pains to recommend that local authorities freeze council tax, while it chooses to do nothing about business rates.”

Over the last two years the Government has given local authorities incentives to freeze council tax, and plans to do the same over the next two years.

The British Council of Shopping Centres director of policy and public affairs Ed Cooke said: “It does look a lot like the Government sees business as a cash cow to raise taxes for local authorities.” The pattern is set to continue over a further two years. Business rates income is expected to hit £30.5bn in 2016 and £31.2bn in 2017, while council tax is expected to generate £30bn in 2016 and £31bn in 2017.

Cooke maintained: “We believe it is rather a short-sighted view and the Government needs to work out how it can act as a wealth generator in terms of increasing productivity and employment. The system of collecting tax at the moment is unsustainable.”

In England alone there are about 1.7 million properties eligible for business rates, while there are 16.1 million dwellings on which council tax is paid, according to data from the Department for Communities and Local Government (DCLG).

Store groups have faced business rates increases of more than £500m over the last three years, which retailers argue inhibit investment and the creation of new jobs.

Next year’s business rates rise will be based on September’s RPI figure, which could hit 3.3% according to initial estimates from the BRC. It is lobbying the Government to impose a 2% cap on rates rises.

A DCLG spokesman insisted the Government is supporting shops and has increased small business rates relief in recent years.