The groups, which represent over 100,000 shops and businesses, want the chancellor to “stimulate growth” by reforming business rates.

The letter called on Osborne to simplify the small business rating assessments and to look more urgently at using the consumer price index, not the retail price index, to set annual increases in business rates.

The letter said that the “overall burden of business rates is too high and at tipping point” and highlighted that “Britain has the highest non-domestic property taxes in Europe, which acts as a brake on investment for all businesses looking to invest in the UK”.

The letter comes after Osborne proposed cutting corporation tax to below 15%, in an effort to make Britain a more attractive proposition to investors following Brexit.

They said: “We welcome action to stabilise economic uncertainty and have all positively welcomed the government’s long-term reduction of corporation tax. But to make Britain a ‘super competitive economy’ business tax reforms must go beyond cutting corporation tax.”

They added that such reforms would “show the government’s ambition to make the UK the best country in which to do business”.

The letter in full: 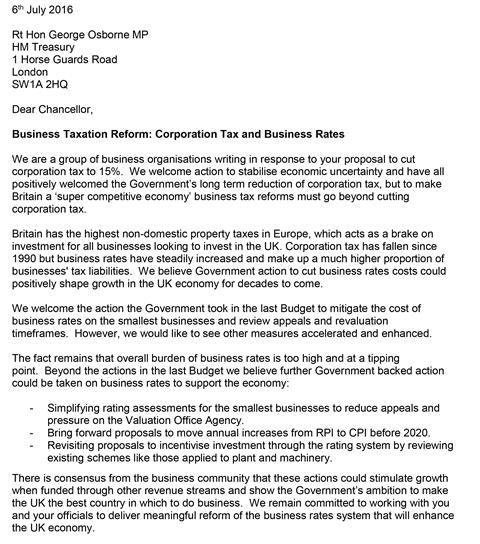