The revamp of London’s Brent Cross Shopping Centre has moved a step closer after the mall’s landlords submitted a planning application. 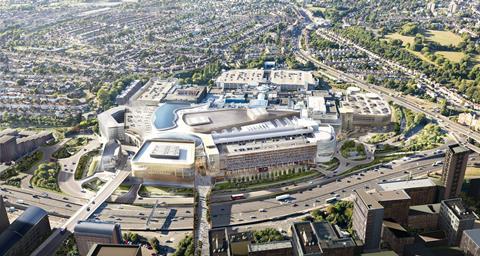 Hammerson and Standard Life have formally lodged details of a proposed £1.4bn redevelopment of the scheme to Barnet Council.

The plans include refurbishing the existing centre and extending it to introduce more than 200 new stores, 60 restaurants, a cinema and a hotel.

Under the proposed work, Brent Cross Shopping Centre will also boast improved public spaces including a new town square, as well as an enlarged bus station.

Designed by architects Callison RTKL and Chapman Taylor, the development would see the shopping centre double in size to around 2m sq ft with 7,600 car-parking spaces.

John Lewis and Fenwick would remain at the centre, with a new Marks & Spencer store becoming the third anchor tenant.

All three retailers were part of the original line-up at Brent Cross when it opened back in 1976.

Work on the revamp, which could start as early as summer 2018 should planning chiefs approve the scheme, forms part of a wider £4.5bn regeneration plan for Brent Cross and Cricklewood.

“We will create a world-class retail destination that will be the catalyst for a new and vibrant quarter.

“Brent Cross has been an iconic part of retail for more than 40 years and our plans seek to ensure that it continues to define the next generation of retail in London.”

He added: “We are in discussions with a breadth of retail and leisure brands who are equally excited at becoming part of north London’s premier shopping centre.”

The application is now open for public consultation for the next three weeks.