Boohoo profits to come in at top of expectations

Fashion etailer Boohoo expects profits to be at the top of its guided range after strong trading in recent weeks. 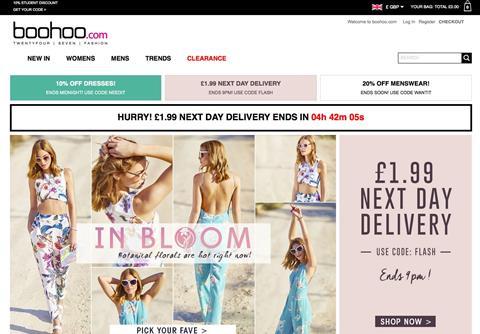 Boohoo also said that sales will be higher than anticipated after a good performance since it last updated in January.

In a pre-close update ahead of its prelims in April, the etailer reported that group revenue growth should be approximately 50% for the year to February 28. It had previously expected an increase of between 46% and 48%.

Adjusted EBITDA margin is anticipated to come in “at the top end of the previously guided range of 11% to 12%”.

The revised guidance includes prettylittlething.com, the etailer which Boohoo bought in January.

Last month Boohoo reported that sales had risen 55% in the four months to December 31, when revenues in the UK climbed 31%.

Active customer numbers were also up by 31% at that time, to 5.1 million.

Boohoo followed up its purchase of prettylittlething.com with the $20m acquisition of US etailer Nasty Gal.

Boohoo completed the transaction today, and said it would be financed from existing cash resources and a new bank debt facility of £12m.

Nasty Gal will be consolidated into Boohoo from March 1.