Black Friday has fundamentally changed the shape of Christmas trade and this year’s festive shopping trend is set to be even more pronounced. 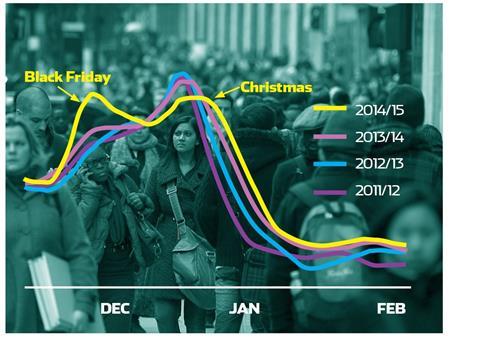 BRC/KPMG data shows for the first time the dramatic impact last year’s Black Friday had on the shape of the entire Christmas trading period against previous years.

BRC/KPMG data, seen by Retail Week and pictured above, shows for the first time the dramatic impact last year’s Black Friday had on the shape of the entire Christmas trading period against previous years.

Retailers last year grappled with supply and infrastructure issues as systems buckled under the weight of the extra demand.

Following Black Friday many retailers experienced a drop off in demand that did not pick up again until a few days before Christmas Day.

And today Argos’s website was hit by gremlins as it launched a 12-day Black Friday bonanza.

KPMG UK head of Retail David McCorquodale said: “Black Friday last year completely disrupted the traditional pattern of festive spending in the UK and this year the effects are likely to be even more pronounced.

“With so much volume changing hands  on a single day, this has an impact on the more traditional Sales periods and inevitably takes volume away from these”

“With so much volume changing hands at discounted prices on a single day at the end of November, this undoubtedly has an impact on the more traditional Sales periods and inevitably takes volume away from these.”

“Looking at the graph, the effects of Black Friday last year resulted in much weaker pre-Christmas and Boxing Day Sales and, not only that, retailers actually saw a distinct lull in spending during early December as consumers waited for the next round of bargains to hit the shelves.”

Black Friday smashed all expectations last year as consumers embraced the shopping event like never before. According to KPMG £1m was spent every three minutes and total sales last year were £810m. This year’s event is expected to rake in £1bn to £2bn according to various estimates. 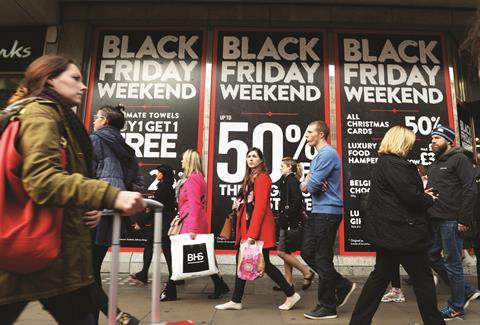 McCorquodale said: “Consumers aren’t necessarily spending more, they are just spending earlier and more than ever hooked on a diet of discounts.”

The knock on effect of Black Friday 2014 resulted in the weakest December sales growth since 2008, with sales up just 1%. Online sales delivered their lowest ever December growth of just 7%.

McCorquodale said: “If consumers are gearing up to spend an even greater chunk of their final 2015 pay packet at the end of November could this mean that the traditional Christmas shopping period in December is over, at least for big-ticket items?”