Asda has launched a new website dedicated to baby products as Morrisons-owned etailer Kiddicare prepares to ramp up its presense in the UK with a store roll out. 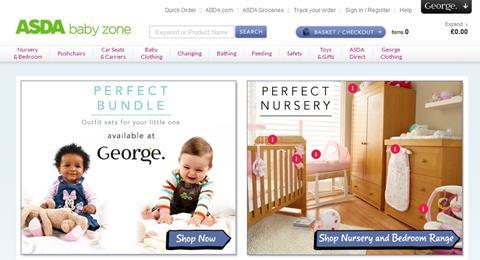 The new site carries 450 new products including clothing from its George range and from fellow retailer Mamas & Papas.

Kiddicare is due to open its first of 10 new stores in former Best Buy sites this autumn.

The etailer is enacting a rapid multichannel expansion plan which includes new stores in Aintree, Derby, Rotherham and Croydon as well a localised international websites in Ireland, France, Sweden, Finland, Greece and Denmark.

Roshani De Zoysa, a buyer for Asda’s non-food Direct division, said: “We want to give parents as much choice as possible and so we’ve been working with our suppliers to bring shoppers a great range of products – all at fantastic prices.”

Asda owner Walmart will update the market on its first half performance on Thursday.