Arcadia tycoon Sir Philip Green has raised the prospect of further acquisitions as he reported a fall in full-year profits. 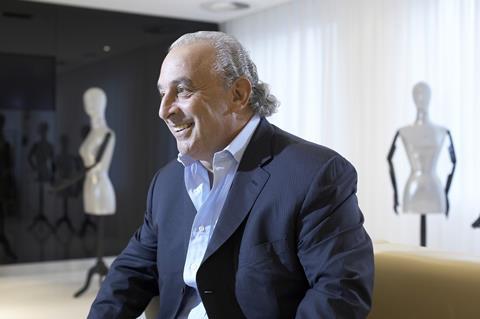 Green said that despite enduring “challenging conditions” last year and into the new financial year he remains interested in doing deals.

He told Retail Week: “We’re in good financial health. We’ve run the business prudently. We’re able to buy sell or swop and we don’t rule out buying anything.”

Green did not go into any further detail but the last time he hinted at deals on an Arcadia results day was in 2012, when he sold a 25% stake in Topshop to US private equity house Leonard Green & Partners a few weeks later.

Green’s stable of Arcadia businesses had mixed fortunes last year. Wallis and Dorothy Perkins were among the best performers after a “lora, lorra activity” to enhance product.

Green described Topshop’s performance last year as “okay”. He said: “there were no fireworks, no disasters”.

Topshop continued to expand globally and further flagship openings are on the agenda. Following the opening of a store on New York’s Fifth Avenue since the year-end, the first wholly-owned store in Europe will make its debut in Amsterdam next February.

Arcadia generated group pre-tax profit before exceptionals of £143.1m in the year to August 30 versus £148.1m the previous year.

In the first 10 weeks of this year total like-for-likes, including VAT, fell 1.2% because of “unseasonably mild and wet weather”.

Green said that despite the impact of the weather on sales, Arcadia was protected by its supply chain strength and had no stock issues.

He said: “When you’ve got people wearing T-shirts on November 15, it’s pretty unprecedented.

“The way we trade our business we’ve got stock flowing, we keep newness flowing. We’re not jammed up to the gunnels.”