The retailer is launching wholesale collections following the popularity of Fifty Shades of Grey. 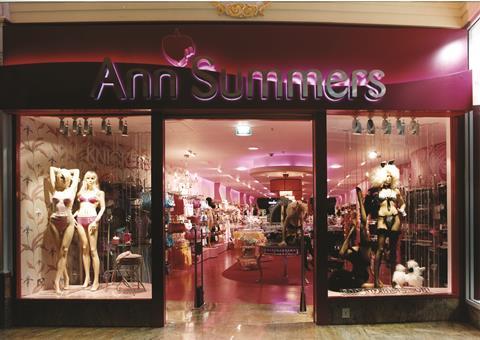 Ann Summers, the sex toy and lingerie retailer, enjoyed a profits uplift last year after it overhauled its brand identity.

The retailer has been working hard to bring back the risqué edge it was famous for with its Ann Summers parties.

It seems to have worked. After developing a new store format, refreshing packaging and product, and relaunching its website, pre-tax profit climbed 43% to £4m in the year to June 30, 2012.

Turnover increased 1.7% to £117.7m in the year, while online sales rose in double-digits after the website changes.

It is a return to form for Ann Summers, which has been in the hands of Gold Group International since 1972 when the firm acquired the retailer from receivership two years after it was founded.

High-profile chief executive Jacqueline Gold has headed the business since 1981 and has been the driving force behind its success, working alongside her sister Vanessa, who is managing director.

Vanessa had worked for the company for 26 years in various roles prior to her promotion in 2011.

Despite Ann Summers going back to its raunchier roots, it is also becoming more mainstream and plans to drive wholesale growth.

Online fashion retailer Shop Direct and health and beauty retailer Superdrug began selling its products over the past year, and Ann Summers can only benefit from consumers’ growing confidence to experiment.

A more mainstream avenue of growth could well be a turning point for what was once a niche retailer.

Gold has said that the popularity of the books - the trilogy written by E L James broke sales records around the world - helped propel sales at Ann Summers in the past 12 months, particularly of products referenced in the books.

For instance, the retailer has revealed sales of nipple clamps increased 15-fold year on year.

The novel could not have come at a better time, coinciding with Ann Summers’ efforts to create a more playful brand. But the retailer can attribute its success to more than just a book launch. In 2011 it opened its Westfield Stratford store, unveiling a new look designed by Fitch. The shopfit featured more theatre, such as themed fantasy changing rooms, which include a playground and ‘mile high club’, and rotating graphics in shop windows.

The format was introduced in seven further stores last year, and a nationwide roll-out is on the cards.

Ann Summers has 137 stores at present, and its target of 150 is in sight. But the retailer has not always been growing its store base.

While it acquired the nine-store lingerie business Knickerbox in 2000, and increased its own store base dramatically from 50 shops to 139 between 2001 and 2006, it began to contract over the next three years as the recession hit.

It also decided to close all Knickerbox stores and instead open concessions for the brand in Ann Summers shops.

It got back on the expansion trail between 2009 and 2011, opening 17 stores as it took advantage of sites left empty by recession-hit retailers.

But a handful of shops have closed in the past 12 months as the retailer focused on its new store format.

Ann Summers also operates stores in the Republic of Ireland and one in Spain. In 2011, Jacqueline Gold stated there was still “huge potential” for the brand. She identified the US in particular as a market that could represent a big opportunity.

The staff on top