The business rates burden borne by retailers will increase by £180m, from next April. As high streets face further pressure, find out here how many stores lie empty in your area.

For retailers operating stores, the latest rise is another hammer blow. 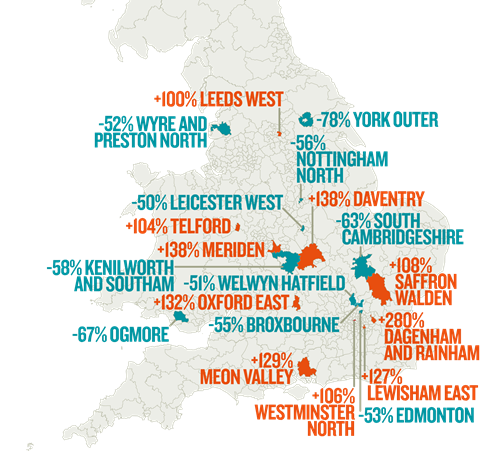 As the BRC pointed out, while the retail industry makes up 5% of the economy it stumps up 10% of business taxation and pays 25% of the entire business rates bill, or £7bn a year.

So far the Government has turned a deaf ear to retailers’ calls for fundamental reform of the rates regime – Brexit has taken up most of its attention.

But retailers contribute to the health of towns and cities through their high street presence nationwide.

As retailers seek to make their case on rates, drawing attention to the issue at a local level where appropriate may make more of an impact in the campaign for change.

This data, searchable by MP or constituency, will provide useful information that retailers can use when contacting MPs in areas where stores are closing about the toll that rising costs is taking.

Excluding Northern Ireland, for which limited data was available, London had the biggest rise in empty premises – 28%.

Vacancies in Yorkshire and the Humber and the Northeast regions – where Labour MPs often hold sway – were each up by 13%. In the Southeast the difference was only 2%.

In the Runnymede and Weybridge constituency of Chancellor Philip Hammond – who is being urged to overhaul the business rates regime – vacancies were up 39%; although small in absolute numbers, this is a rise of 11 empty units to a total of 39.

De Mello says vacancy numbers are a metric that can bring home to MPs the impact of the costs, such as business rates, shouldered by retailers that run stores.

He observes: “Vacancy rates are a barometer of vibrancy so it’s in their interests to try and keep vacancies as low as possible.

“Business rates can be higher than rent in some areas and it’s an issue that needs to be pushed.”

To search the table, use ctrl+f or cmd+f on your keyboard. Each of the columns can be sorted alphabetically or numerically.

The figures are a count of vacant units in 2013 and again in 2018, aggregated to parliamentary constituency. The difference between the two numbers are effectively the net store closures by area over this five- year period.

The net number of vacant units is given because store closures are difficult to track by surveying.

The vacant units that are included are only former stores/services. There are some constituencies for which no data was available because the retail centres in those areas are so small. Northern Ireland is excluded because of limited data.

The figures do include retail units on retail parks/leisure parks/shopping parks.