Google has rebranded and expanded its same-day delivery service and launched an Amazon Prime-style membership fee for it. 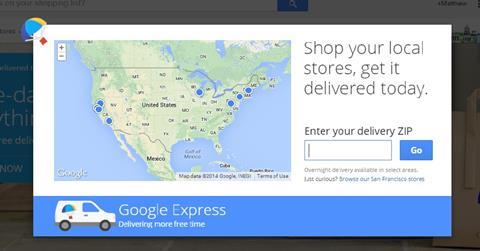 Google Shopping Express has been renamed Google Express and will now deliver products from brands including Barnes & Noble, PetSmart and Sports Authority to more parts of the US.

Google Express was previously only available in the Bay Area, parts of New York and Los Angeles, but is now being extended to Chicago, Boston and Washington DC.

Around 7 million Americans will now have access to the same-day delivery service, while almost 12 million people can use the next-day service.

Customers in the Bay Area who are 21 are now able to order alcohol.

Google revealed it was expanding the service on the anniversary of the first Google Express delivery, which was a box of granola.

In a blog post, Google Shopping head of partnerships Brian Elliott said: “Our idea was to make shopping your favourite local stores as easy and fast as shopping online, and to help you get what you need delivered the same day.

“Since then, you’ve told us how we helped you restock diapers in the nick of time, made sure you had Bananagrams for family game night, and even made you feel connected to the outside world when you were home sick.”