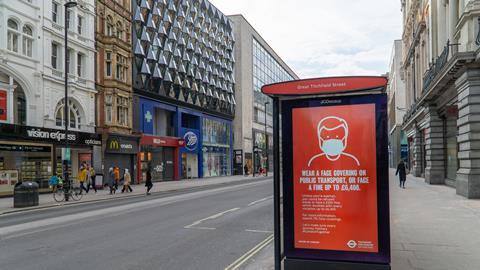 New data has found that of Europe’s six biggest retail high streets, Oxford Street has suffered the most from lost footfall and consumer spend.

The survey analysed footfall data from March 2020 to March 2021 from Oxford Street, the Champs-Élysées in Paris, the Gran Vía in Madrid, Rue Neuve in Brussels, Via del Corso in Rome and Kurfürstendamm in Berlin, which all suffered significant falls in customer footfall, both domestic and international.

But as the table shows, Oxford Street’s average 71% footfall decline across the 12 months was the most profound of any European capital, more than double the footfall loss experienced by the most resilient high street on the continent, the Kurfürstendamm.

Alongside the footfall data collected by Mytraffic, Cushman & Wakefield’s data on rental valuations highlights the effects of the pandemic on landlords as well.

Due to restrictions on so-called ‘non-essential’ retailing, Cushman & Wakefield noted that available – not necessarily vacant – retail space amounts to 25% of the total on both Oxford Street and the Champs-Élysées in Paris.

It found that due to the spike in store closures, particularly in so-called non-essential retail such as apparel, “rental values have fallen almost everywhere”.

For example, rents have dropped by up to 20% on the Kurfürstendamm, despite it being by far the most resilient European retail destination in the past year.

In Paris and London, the full effects on the market have yet to be fully felt, due to a lack of new transactions between landlords and retailers. Although Cushman & Wakefield anticipated at least a 20% average rent reduction across both destinations.

The worst affected in terms of rental values was Rome’s Via del Corso.

‘Oxford Street is lagging behind’

“Oxford Street is characterised by limited outdoor space for retailers and relatively narrow pavements. As a result, it has traditionally had an imbalance in the retail mix with no serviced restaurants and very little leisure – spas, gyms and so on.

“For physical improvements to the street, Oxford Street is lagging behind. It has a multitude of different landlords who are not acting together. Pedestrianisation has been suggested many times, but it keeps being rejected. It needs serious financing to try and improve just the look of the whole street.”

With average rents of £377 per sq ft, the study found that Oxford Street is currently the third most expensive destination in terms of rental value in Europe – after the Via del Corso [£467 per sq ft] and the Champs-Élysées [£498 per sq ft].

While Mace says that rental values will come down over time as the UK retail property market corrects, he says landlords will need to look more to office space to ensure the long-term viability of the district.

“Oxford street is characterised by limited outdoor space for retailers and relatively narrow pavements. As a result, it has traditionally had an imbalance in the retail mix with no serviced restaurants and very little leisure”

“There is about 400,000 square feet of commercial space available on the street, with a very low volume of completed transactions over the past year. For the past 18 months, no new player has entered the market, the only store openings are relocation.

“All this surplus supply, particularly for very large stores, will lead to a reconversion of space towards a mix of uses, especially offices – which are in higher demand than retail.”

Despite Oxford Street’s travails during the pandemic, there are already greenshoots of recovery emerging.

New West End Company chief executive Jace Tyrrell says that footfall has recovered to about 50% of pre-Covid levels while vacancies are hovering at around 7.5% – down from a height of 12.5% during the peak of the pandemic.

The district is also pinning high hopes on bringing Londoners and holidaymakers from the UK back into the district with a £150m project for the summer, including expanding greenspace, widening pedestrian routes and building Marble Arch Hill – a 25-metre viewing platform.

Longer-term, the district is primed for the opening of the Elizabeth Line in 2022, the reopening of theatres, and eventual return of commuters and international tourism.