Homebase is to forge stronger links with sister retailer Argos as the DIY business transforms itself into a digital leader and prepares to close around a quarter of its stores. 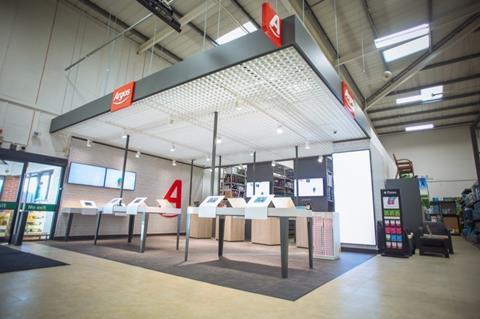 As part of its plans to bolster its multichannel appeal Homebase customers will be able to pick up click-and-collect orders from Argos stores.

Homebase also plans to launch new apps and use its stablemate’s digital lab to drive innovation.

The retailer will also roll out more Argos concessions after a successful nine-store trial that drove footfall to the DIY retailer’s branches.

John Walden, boss of Homebase and Argos owner Home Retail, said Homebase has scaled up its digital ambitions and there is an opportunity for it “to step in and lead” the DIY sector.

Home improvement retailers have lagged behind the rest of the retail sector when it comes to ecommerce.

Walden said Homebase will offload around 80 of its 323 stores to compete more efficiently in a DIY market that is shrinking as time-poor young people hire professionals rather than carry out DIY themselves.

Walden said: “The DIY market is over-spaced in terms of how much we sell per square foot and the shifting of business to online, and this suggests store space is going to need to change.”

Rival B&Q has been trying to carve up and sublet its largest stores but has made slow progress so far. Travis Perkins-owned Wickes has also attempted this strategy.

Walden said the Homebase stores earmarked for closure are the “least productive” in the estate.

Homebase has already closed seven stores in the first half and plans to shutter 30 in total by the end of the financial year.

Walden insisted he had not prioritised Argos over Homebase’s development in his time as Home Retail boss.

He said: “The Argos digital transformation has nothing to do with Homebase shrinking. We have plenty of capital to invest and Argos is not stopping us doing what we need to do at Homebase.

“If you take from this plan [that] we are being unambitious for Homebase then I have done a really poor job of communicating what we were doing there.”

Despite DIY retailers and grocers shuttering stores and scaling back expansion, figures from property research firm Trevor Wood Associates found vacancy rates on retail parks dropped from 10% to 8% year on year in the first half of 2014, as retailers including B&M, Poundland and Wren Living piled in.

Homebase is parting company with its managing director Paul Loft and Walden said the retailer aims to replace him with an external hire.