Karen Millen has signed up Game of Thrones actress Sophie Turner as the star of its autumn campaign as it celebrates London’s style and creativity. 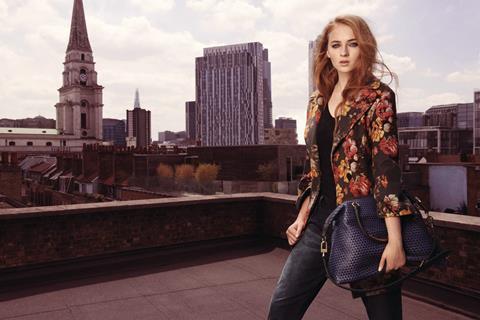 British actress Turner, who stars as Sansa Stark in the HBO television series, has been unveiled as brand ambassador after a teaser video that followed an unnamed celebrity around the streets of Shoreditch, where Karen Millen is based.

The film, called ‘The Journey’, is supporting the retailer’s global expansion plans, which include the opening of a flagship store on New York’s Fifth Avenue earlier this month and planned store openings in Mexico, Norway, India and Taipei later in the year.

Karen Millen has also opened a flagship store in London’s Knightsbridge in May.

The marketing campaign was developed with an all-British creative team and stars British models Lara Mullen, Rosie Tapner and Brogan Loftus as part of a strategy of tapping into the demand for British creativity and design.

Karen Millen chief creative officer Gemma Metheringham said: “The campaign is a celebration of the creativity, craftsmanship and inspiration which is on our doorstep and reflected in our stores and collections all around the world.

“It brings together a team of the best of established and emerging British creative talent.”

The film is being supported by a ‘Tailored in London’ pop-up workshop in its Knightsbridge store from September 1 to allow customers to personalise products and show-off the attention to detail the company puts into its ranges.