An online shopping frenzy is expected to start on Black Friday and run into next week, resulting in record etail sales. 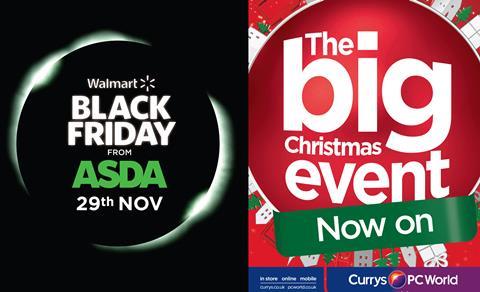 Black Friday promotions lead on to Cyber Monday when etail sales are forecast to hit £605m on what is likely to be the busiest online shopping day of the year.

More retailers than ever before will launch Black Friday promotions.

John Lewis will for the first time launch Black Friday promotions in electricals, including 50% off selected items. Buying director for electricals and home technology Ed Connolly believes Friday will be the biggest day of the year for the category at the department store group.

He said: “This is the first time [Black Friday] has appeared on our radar in a serious way. We expect it to be twice as big and twice as bold as last year.”

The retailer will be offering promotions in store and on Johnlewis.com. Black Friday has largely been an online phenomenon since it was introduced in the UK by Amazon in 2010, but for the first time it is set to have a prominent appearance on the high street.

He told Retail Week: “We’re taking a brick out of the dam this year. In four or five years’ time it will be a big event.”

Moore predicts Friday will be the busiest shopping day of the year so far for Asda. Dixons will launch ‘The Big Christmas Event’ which continues until Christmas Eve. Apple is running a day long shopping event on Friday. Amazon has extended Black Friday and launched a week of flash Sales with a new deal every 10 minutes. Etailer Very will run hourly deals tomorrow.

The offers are set to stimulate spending ahead of Cyber Monday, when sales are forecast to increase 16% year on year, according to research by the Centre for Retail Research for VoucherCodes.co.uk.

Tesco said that website traffic this week is already more than double normal levels and it expects it to continue to Cyber Monday.

However, some retailers including Shop Direct and eBay believe peak trading will fall a week later.

Shop Direct group retail and strategy director Gareth Jones said: “Christmas has come later and later for us over the last few years, as customers’ confidence in the online model has continued to grow.”

eBay UK vice president Tanya Lawler said that it is expecting a longer peak shopping period this year right up to Christmas week. She said: ” It’s not just about a few busy online shopping days any longer.  Ecommerce standards have evolved so that consumers expect faster delivery as well as options to pick their goods up locally if they want to.”

Online sales are expected to hit £5bn this Christmas according to Deloitte.