Staples’ 106 UK stores are being renamed Office Outlet by new-owner Hilco Capital, which snapped up the retailer last year for a nominal sum.

The restructuring firm, which also owns entertainment specialist HMV, said the Staples estate would be transformed in “record time”.

The entire rebadging process, along with the installation of a new EPOS system, is due to be completed by the end of this week.

“The reality is we’re kicking everything off very quickly and then we’ll be refining the proposition in the weeks to come with an improved product mix and much better pricing and promotions,” Hilco Capital marketing director Matt Bone told Retail Week.

The fresh branding on the newly named Office Outlet stores – which are largely located in out-of-town retail parks – is in keeping with Staples’ traditional red and white colour scheme. 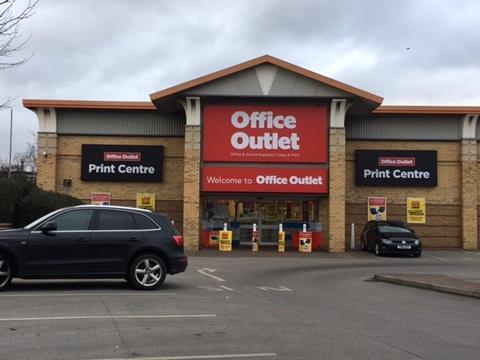 Staples Inc said the decision was taken in order to place greater focus on its North American and mid-market divisions.

Last year, the business was pushed into exploring “strategic alternatives” for its European operations after it was forced to shelve a $6bn (£4.53bn) merger with rival Office Depot by America’s competition authorities.

Staples Inc consequently assessed the future of its European arm as it sought to wipe $300m (£226m) from its annual cost base.

When the deal to sell its British business to Hilco completed last November, its new owners unveiled plans to “phase out” the Staples brand in the UK, but provided no further details as to what that strategy looked like.

At the time, Hilco Capital chairman Paul McGowan said: “While retail in the UK has been challenged recently, a team led by retail veteran Alan Gaynor will work alongside the existing management team to build a plan for success for the business.”