Sports Direct's Mike Ashley: 'We'll come to your country and smash you'

Mike Ashley has warned that unless European sports retailers welcome overtures from his Sports Direct business as it seeks international deals they face destruction at its hands. 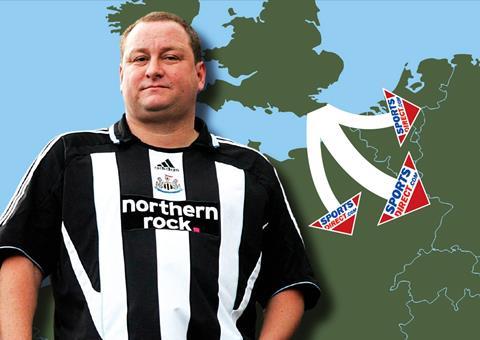 The billionaire entrepreneur is determined to build a powerful European presence by “identifying and working with strong local partners” but if its interest is spurned Sports Direct will adopt an aggressive stance.

Ashley said that Sports Direct’s expansion tactics include opening a small number of shops in target markets to pique interest from potential partners but if that does not work battle will commence.

Speaking to analysts following Sports Direct’s recent prelims, Ashley is understood to have said: “It’s about putting shops down in a few places and seeing who wants to play. If you don’t want to play, we’ll come to your country and smash you to bits.

“That’s the message that we’ll be putting out over the next 12 months to people in Europe.”

Ashley maintained that Sports Direct and its partners have a great opportunity to create win-win relationships.

“Work with us and we’ll make a lot of money together,” he said.

Its smallest countries by store numbers include Spain, where there is one shop, and France where there are six – indicative of the potential for growth on the Continent.

Last year Sports Direct opened 200,000 net sq ft of space in Europe at its existing businesses and another 1.9 million sq ft through its Austrian acquisition and the purchase of a majority stake in Baltic business Sportland International.

It is the market leader in Estonia, Latvia and Lithuania where Sports Direct now has 80 stores in total.

Liberum analyst Sanjay Vidyarthi said Sports Direct faces tough competition in some big European markets where there are strong incumbents such as Decathlon.

However, Vidyarthi said: “We’ve identified potential targets equating to over 1,000 stores across Europe and about €2bn (£1.6bn) of sales.”

Sports Direct also intends to open in Australia. It has a stake in newly listed etailer MySale, in which Sir Philip Green is also an investor, and said earlier this month it would reveal a tie up with “a leading Australian retail partner shortly”.