Morrisons chief executive Dalton Philips is to stand down as the grocer seeks to appoint a new leader to return it to growth. 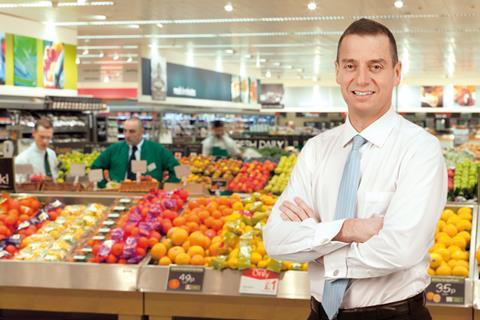 Philips, who has led the grocer for five years, will remain in post until year-end results. The search for his replacement has begun.

Morrisons incoming chairman Andrew Higginson, who will take up his position earlier than scheduled on January 22, said:  “In the next chapter of Morrisons development, we need to return the business to growth.

“The board believes this is best done under new leadership.”

The news came as Morrisons like-for-likes, excluding fuel, fell 3.1% in the six weeks to January 4. The performance was better than the 3.8% decline the market had forecast. Online contributed 1% to like-for-likes during the period.

Total sales slipped 1.3% and the grocer revealed it will close 10 loss making stores this year.

Morrisons said sales trends improved over the Christmas period “as we continued to make progress in all components of the trading strategy we laid out last March”. It said it benefited from better pricing and execution.

Items per basket were down 0.2% over the Christmas six weeks, but that was better than 2.4% year-on-year decline in the third quarter. The number of transactions improved from a 3.3% fall to a 1.7% decline.

Morrisons said Black Friday impacted the start of the reporting period, but it was “encouraged that like-for-like and volume performance was stronger in the last four weeks, the key trading weeks for food”.

Morrisons’ online and convenience arms – areas where the grocer is lagging behind its big four rivals - were said to have performed well.  Morrisons did not provide sales figures for either channel but said its ecommerce operation achieved “industry-leading customer service metrics”, with deliveries on time 97.5% of the time in the busy pre-Christmas week.

In its M Local convenience shops, Morrisons said it served 5 million customers over the 6 week period - double the number of last year. The grocer has opened 17 of the shops so far during the fourth quarter, bringing the total to 46.

Morrisons said feedback for it Match & More price matching and loyalty scheme has been “excellent” and it is performing “ahead of our expectations”.

Of Philips’ departure Higginson said:  “I would like to thank Dalton for his contribution.  He has brought great personal qualities and values to his leadership of the business, having had to manage against a background of considerable industry turmoil and change.

“He deserves particular credit for facing into and dealing with the pricing issues that have now become evident, for taking the business into the convenience and online channels, and for the steps he has taken to modernise the company’s operating systems. We wish him well for the future.”

Philips said: “Morrisons is a great company with exceptionally talented people and I have been very proud to have worked with them.

“Over the last five years, we have made many improvements to the business and given Morrisons strong foundations for the future.

“I wish every success to the company and all of my colleagues, who have, and continue to work so hard.”