The Co-op was the fastest growing non-discounter for the first time since 2011 as Aldi and Lidl continued to steal market share. 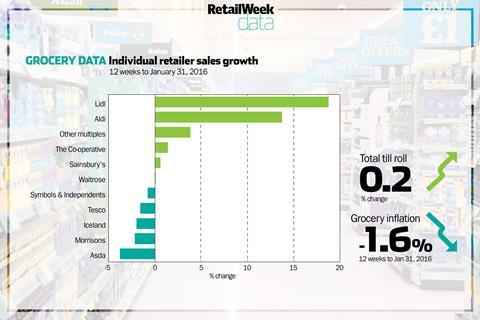 The mutual posted a strong quarter as revenues in its food business increased 1.4%, driven by a 7% increase in own-label sales. Its market share remained consistent at 5.9%, according to Kantar Worldpanel.

The grocer was the most frequently visited major supermarket during the period, with its customers shopping there an average of almost 19 times over the past 12 weeks, compared with a market average of 11 visits.

It comes days after the Co-op revealed that it was acquiring 15 stores from convenience specialist Budgens in London and the Southeast. The retailer plans to purcahse 100 new stores in 2016 and further grow its market share, patrticularly in the fast-growing convenience sector.

Discounters Lldi and Aldi continued to steal share from the big four during the 12 weeks to January 31, as total sales advanced 18.7% and 13.7% respectively. Lidl’s market share rose to 4.2% while Aldi’s grew to 5.6%.

Sainsbury’s continued to outperform its big four grocery rivals during the period, with sales up 0.6% during its sixth consecutive period of growth. Its market share edged up 0.1% to 16.8%.

However, it was a different story for arch rivals Asda and Tesco. Asda saw sales slip 3.8% during the quarter, while its share of the market dropped to 16.2%.

Tesco, which recorded a 28.5% share of the market, posted a 1.6% slip in sales – although that marked the grocer’s best performance since last September.

Upmarket grocer Waitrose recorded its 91st consecutive period of growth – the longest current run of success for any grocer. Sales increased marginally by 0.1% while market share remained static at 5.2%.

The findings were backed up by data from Nielsen, which showed that Sainsbury’s continued to outperform its biggest competitors during the four weeks to January 30. The grocer was the only big four supermarket to record a rise in year-on-year sales, of 0.2%.

Asda posted the largest fall in year-on-year sales across the top 10 supermarkets, with sales down 4.4% during the 12 weeks to January 30.

According to Kantar, the grocery market returning to slow growth after a disappointing Christmas period, with consumers looking for healthy foods particularly around the fresh foods category.

Fraser McKevitt, head of retail and consumer insight at Kantar Worldpanel, said: “Consumers are clearly striving for a healthier start to the year and have turned to fresh foods – particularly fruit and vegetables, which have both grown sales by 5%. Given that they’re still experiencing like-for-like deflation, it’s a significant revenue growth for both categories, shared across both traditional and discount retailers. Similar growth has been seen in nuts, fresh poultry and fish.”