Asda has posted its sixth consecutive quarter of like-for-like growth as the grocer builds momentum ahead of its proposed merger with Sainsbury’s.

The supermarket giant posted a 2% uplift in same-store sales, excluding fuel, during its third quarter.

Net sales increased 3.7% during 13 weeks to October 26 but gross profit slipped again as Asda continued to plough investment into its turnaround plan. 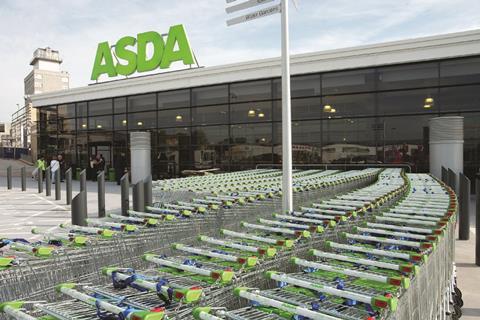 Asda’s owner Walmart said the grocer’s sales growth was driven by the performance of its own-label proposition.

It introduced 113 new lines into its ‘free from’ range and partnered with Denbies to launch its first English sparkling wine.

Asda boss Roger Burnley said: “In a challenging third quarter for the market, we continued to focus on the areas that we know are important to our customers and deliver on our strategic priorities. As a result, we were pleased to welcome an additional 115,000 customers through our doors and outperform the market for the second quarter running.”

He added: “As we enter what will undoubtedly be an incredibly competitive festive trading period, our stores are fully prepared to bring Christmas home for our customers. I would like to say a huge thank you to our fantastic colleagues for all their efforts to make shopping with Asda easy and friendly over the festive season.”

Asda’s recovery over the past 18 months has been borne out of investments in price, quality and customer service, while it also made moves to restructure its store operations amid rising costs such as the national living wage and the apprenticeship levy.

Last month, the grocer revealed it had launched a consultation with 2,500 staff working across its head office, bakery, petrol forecourt and George clothing functions.

Any redundancies resulting from the consultation will come into force next year.

Asda insisted the potential changes, which could involve alterations to employees’ roles and working hours, would allow it “to do a better job for our customers”.

The grocer’s proposed merger with Sainsbury’s is being probed by the Competition and Markets Authority.

Suppliers and supermarket rivals have voiced concerns over the plans, while the CMA has identified 463 locations that could suffer from a “substantial lessening of competition”.

Walmart chief executive Doug McMillon said: “We received follow-up communication from the competition authorities related to the proposed merger of Asda and Sainsbury’s.

“This latest statement was in line with our expectations, and we will continue to proactively work through the process with the CMA.”