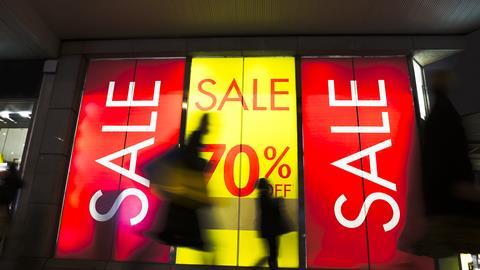 While Christmas should be a time for celebration, for some retailers sales didn’t quite hit the mark – so what steps can be taken to turn things around?

It’s been a mixed bag for retail this Christmas. As the trading updates come rolling in, feedback has ranged from “better than expected” to “unusually challenging”.

While it’s not all doom and gloom, there are some retailers nursing post-Christmas hangovers as sales failed to meet expectations.

How can these retailers mitigate a bad Christmas? It won’t be an easy road, but here are a few ways to start the recovery process in the new year.

The easiest place to start is with a killer January Sale.

Some shoppers will snap up bargains in a bid to beat the post-Christmas blues and, while they may not make for the healthiest margins, Sales will clear through unsold stock and free up much-needed warehouse space for new-season product.

Heavy discounting not only helps to move stock, but also encourages shoppers to buy products they may not have looked at previously.

Social media advertising, incentives for spending over a certain amount and shouting about further deeper discounting are all ways to bring customer’s attention to big Sales.

It could be argued that the annual January Sales have been eclipsed by Black Friday, with buyers spending their cash in the pre-Christmas event.

Retailers looking to recover from a disappointing Christmas need to emulate the buzz around Black Friday in their New Year discounting, switching up the marketing to create an unmissable extravaganza, rather than a desperate attempt to shift last season’s products.

Make the most of returns

Instead of simply giving refunds, exceptional customer service may entice shoppers to exchange their items or spend elsewhere in store.

While most retailers are yet to tap into this idea, it could be a low-cost way of protecting from the losses incurred by returns.

Meanwhile, it is essential to make the returns process as smooth as possible, as it will encourage shoppers to buy again.

According to a Royal Mail study released last week, three in five consumers are unlikely to use a retailer again if they have a difficult returns experience.

It may not boost sales immediately, but this could pay dividends in the long run.

Sales aren’t the only way to bring consumers to store in January.

Shoppers are increasingly moving away from buying things to buying experiences.

Retailers can get in on this trend by offering experiences in store.

And it stands to reason that shoppers seeking a pick-me-up may book a beauty service or a personal shopping session. This could create a new wave of post-Christmas spending.

January is a time for new resolutions and new beginnings.

Many people express a renewed focus on health and fitness after festive overindulgence, so these are key areas to look to for January inspiration.

Off the back of its successful launch of a vegan sausage roll last year, bakery chain Greggs rolled out vegan versions of its steak bake and doughnut to mark the beginning of Veganuary.

Other fast-food chains have followed suit, with KFC’s vegan chicken burger, Subway’s meatless meatball marinara and McDonald’s veggie dippers all coming on to the market for January.

Beer company Brewdog launched an alcohol-free bar in London on January 6, as well as running a ‘Drink all you can Jan’ campaign, which entitles customers to unlimited refills of alcohol-free beer across all its bars for the entire month.

This move reflects an increase in the number of alcohol-free products on the market.

Marks & Spencer’s low-alcohol wine category is up 89% year on year in volume growth and, with the trend ever growing, ranges such as the retailer’s alcohol-free botanical G&T are sure to expand.

Many consumers may also have a new year’s resolution to live more sustainably. Retailers can capitalise on this with targeted product ranges, or by shouting about their own sustainability agendas or pledges to align themselves with customers.

Mitigating a bad Christmas is an uphill struggle, but the best thing retailers can do is learn lessons for the next season and subsequent year.

Reviewing what went wrong can ensure that, next time, it all goes right.

To hear more on this topic and the Christmas 2019 trading results and economic and consumer outlook, join PwC at one of their nationwide events beginning on January 22. Sign up at pwc.co.uk/industries/retail-consumer/golden-quarter/retail-briefings.html

Cisco has made a big commitment to establishing and developing the experience within retail. To find out more about Cisco Digital Retail Solutions, go to cisco.com/c/en/us/solutions/industries/retail.html