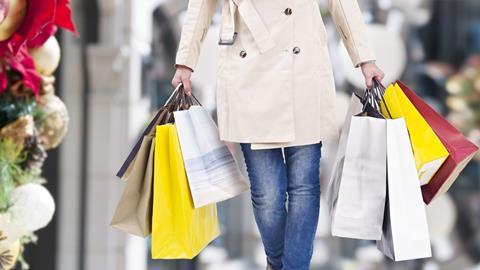 Retail experts at PwC are predicting a swathe of discounting in the pivotal final weekend before Christmas in a bid to woo last-minute shoppers.

She says: “Our analysis shows that most retailers have wised up in their promotional activity, particularly for Black Friday, and many have been disciplined to return to full price after.

“However, for some, especially fashion brands, they may be under pressure to discount further in the coming weeks to clear winter stock given the slow start to the season.”

The late onslaught of promotional activity comes after the majority of retailers held their nerve in the aftermath of Black Friday and returned to full price the following week.

This week, 43% of bricks-and-mortar retailers were on promotion two weeks after the discounting event. This figure is substantially lower than the 57% in 2017 and the 63% in 2016.

However, holding off promotions may have stunted sales at some retailers. John Lewis reported a lull in trading post-Black Friday, with sales falling 11.9% year on year at the department store in the week to December 14.

Retailers are offering heavier discounts online than in store, with 59% of businesses slashing prices online this week, compared with just 43% in store.

Online shoppers are able to easily search for similar products at lower price points, giving etailers a greater impetus to promote in order to compete.

Meanwhile, bricks-and-mortar retailers can capitalise on shoppers’ desire for instant gratification by providing inspiration for last-minute gifts in store and avoid excessive discounting.

This may be why some retailers are only discounting online. In fact, over the whole of November and December so far, 63% of retailers in PwC’s survey promoted for more weeks online than in their physical stores.

Some sectors have promoted more than others in the run-up to Christmas. Online, department stores, electricals and entertainment retailers were the most promotional, with 56% of businesses offering discounts.

Fashion retailers were the most promotional in store, with 45% of the businesses monitored pushing deals this week.

This is despite the clothing sector going hard during Black Friday.

These desperate discounts have not necessarily done the trick to counteract the autumn slump as some retailers have since gone on to issue profit warnings.

Premium fashion retailer Ted Baker issued a profit warning after Black Friday, one of several this year, after sales came in “below expectations”.

What has been described as “the most challenging year in our history” by Ted Baker went unaided by its blanket 30% off promotion both in store and online.

However, Hooker says pre-Christmas discounting will not offset the Boxing Day Sales. “We expect to see significantly higher promotional levels this weekend and a bumper Boxing Day Sale compared to previous years, with deep discounts for patient consumers.

“Retailers will need to balance any discounting carefully to avoid eroding margins, but also ensure they clear autumn-winter stock ahead of the new season.”