Virgin Atlantic chief executive Craig Kreeger has said that “permission to fail” is central to continued innovation and business success.

Speaking at Retail Week Live, where he addressed delegates on topics including brand power, customer satisfaction and business partnerships, Kreeger said: “Our customers and our people give us permission to fail… not to fail them but to try new ideas that might not work.

He added that when he arrived at the airline in 2013 the idea that it was “okay to fail” had diminished, following financial woes but that Virgin Atlantic had since recovered its pioneering spirit.

He continued: “We have a tendency to believe that the best ideas come from a really smart person sitting a dark room, thinking. But that is not the way for us.

“Innovation requires structure: bringing a disparate group of people with different strengths and weaknesses from different areas of the business together and asking them a question.”

Kreeger said that one way to create fearlessness among staff was to label innovations a “test”.

He added: “If you call it a test everyone knows it’s okay to fail, and they try new things.”

He revealed that Virgin Atlantic had shied away from business partnerships in the past out of concern that its uniqueness would be diminished. 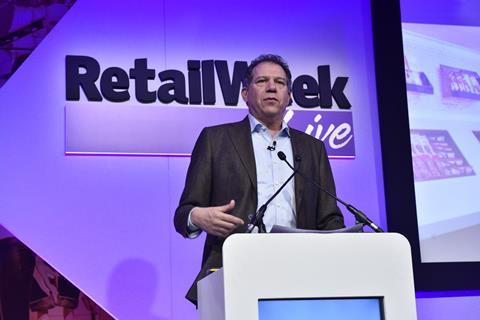 The airline partnered with Delta Airlines in 2013. Kreeger explained that Virgin Atlantic had continued to focus on disrupting the market with new ideas, despite being a very different entity to its partner brand.

He added that despite Virgin Atlantic’s bad financial run, the airline had set aside funds for continuing to enhance customer experience instead choosing to save money behind the scenes on operations because that was its key differentiator.

Kreeger explained that Virgin Atlantic’s brand power was ultimately in the hands of its staff.

“Brand is not a marketing message. Brand is about what you deliver, not what you say. What customers say after they experience your product or service is the definition of brand.

“We design the brand but we don’t win an arms race on better bottles of wine or bigger video screen… we win because our people make the Virgin brand better.”

Don’t forget you can follow all the latest news & analysis from Retail Week Live here.