John Lewis Partnership has reported a drop in sales for the sixth week of its financial year, as fashion sales decreased 10%. 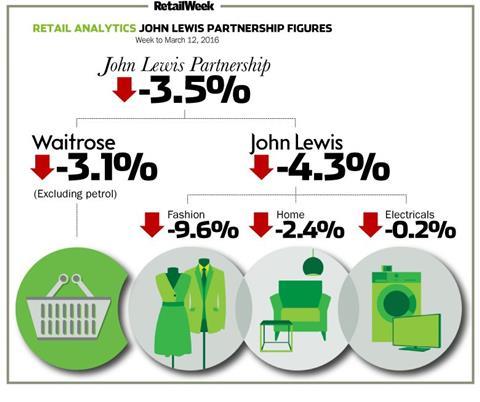 Overall, sales at the partnership were down 3.5% in its sixth week, though the six weeks of the 2016/17 financial year are up 3.1% on the previous year.

Waitrose followed the same pattern, with sales down 3% in the week and up 2.7% in the six weeks.

John Lewis said because Mother’s Day fell a week earlier than in the previous year, it resulted in “tougher trading conditions”.

At John Lewis, total sales were £71.5m. Homewares were down 2.4% overall while electricals and home technology sales fell 0.2%. Furniture and audio were in positive growth, with a 4.8% uplift and 4.4% uplift respectively.

“Customers will continue to prepare for Easter during the week ahead as we move forward into spring.”

At Waitrose, sales excluding fuel were down 3.1% owing to Mother’s Day falling later than last year. Combined sales for the two weeks were up 3.4%.

Waitrose picked out Easter and convenience foods as two areas that performed well. Sales of hot cross buns were up 20%, contributing to a 1.6% increase in the bakery, hospitality and food-to-go category. Easter staples, including confectionery and eggs, were up 102%.

The football and rugby at the weekend meant that ready meals were up 3.5% and pizza was up 15%.

Waitrose added that its online orders were up 7.5%, year on year.