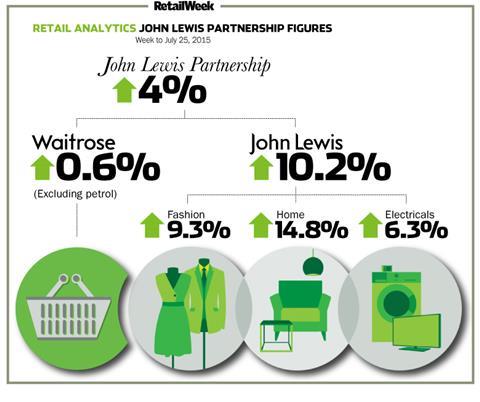 Sales jumped 10.2% year on year to £76.5m as the department store recorded sales increases across all of its categories.

Fashion increased by 9.3% year on year after being boosted by menswear and childrenswear. Men’s branded casualwear was the stand out performer with a 27.7% increase.

John Lewis operations director Dino Rocos said: “As we move towards the end of the half, we are in a good position to offer our customers a taste of things to come with a strong representation of new season stock arriving online and in our branches.

“The changeable weather is on our side as warmer snaps see increased demand for high summer lines and short showers encourage our customers to begin to think about Back to School and the all-important second half of the year.”

Meanwhile, sister retailer Waitrose recorded a slight increase in sales despite the disappointing weather compared with the same week last year, which was one of the two hottest in 2014.

Soup sales increased 28% compared with the same week last year, while hot desserts such as bread and butter pudding and crumbles recorded a 22% increase in demand.

Meanwhile, Waitrose cafes’ orders of food and drink rose 32% year on year as customers sheltered from the rain.