Retail Diary: Will the real John Lewis please stand up?

To Virginia, dear readers, where “computer science educator, father of four, social liberal, atheist and not a retail store” John Lewis received a better Christmas present from his namesake than he usually does.

Lewis’s fate, as the recipient of the daily whines and groans of Middle England consumers, is probably rather testing around peak trading.

But this festive season he seemed delighted with a huge parcel of John Lewis products, tweeting his thanks to John Lewis, the store.

On a darker note, he has recently discovered a kindred spirit in @MikePence, “software developer, writer, and speaker. Recent marathoner and grandpa. Not a Christo-fascist politician”. 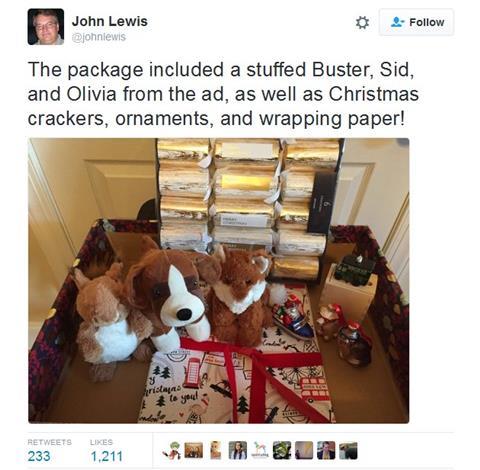 John Lewis’ thanks to John Lewis

All freeze at the Boux Avenue winter launch

Theo Paphitis’ lingere retailer launched its autumn/winter collection at a celeb-drenched party in London this week.

But the retail tycoon’s guests froze to the spot – and not just the ones that were scantily dressed in the new range of undergarmets.

All 200 guests, Theo included, participated in a ‘Mannequin challenge’, by standing frozen to the spot – like musical statues.

See if you can spot the man himself, along with The Only Way is Essex’s Lucy Meckleburgh and Strictly Come Dancing’s Oti Mabuse.

For Marks & Spencer’s recent strategic update, analysts and journalists were gathered together to hear from boss Steve Rowe, rather than hosted in separate meetings as is often the case.

The reporters and brokers were each allocated time at the meeting to ask all they wanted, but it wasn’t quite enough for some. UBS analyst Adam Cochrane threw in an extra question during the period set aside for the fourth estate.

“I’m working for Retail Week this time,” he quipped.

We’re flattered he fancies working for us, but suspect we can’t afford him.