Dixons is poised to plug into hundreds more high street shops by creating a formidable click-and-collect offer with Carphone Warehouse if a merger of the two goes ahead. 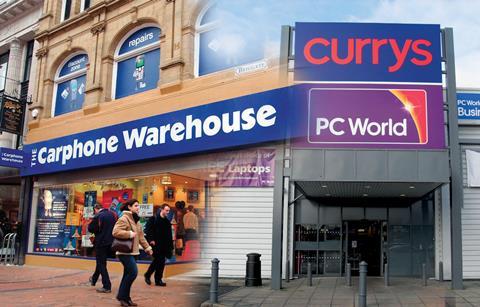 The Currys and PC World owner is in early-stage talks about a union with the mobile phone giant, which would enable Dixons’ products to be collected from Carphone’s 785 UK stores.

The initiative would give Dixons, which has 458 predominantly out-of-town UK stores, access to convenient high street locations where customers could pick up online orders.

It would echo a similar tactic employed by Tesco, which has used its Express convenience stores to broaden access to click-and-collect shoppers.

It is understood multichannel benefits are a key attraction of a deal for both parties. Bricks-and-clicks has been at the heart of Dixons’ revitalisation strategy, led by boss Sebastian James, as it confronts fierce competition from pure-plays such as Amazon. Dixons last year introduced a pilot of same-day delivery on small appliances. Its online sales rose 23% over Christmas.

Carphone offers reserve and collect and attracted a record number of visitors to its website over last year’s golden quarter.

A merger would create a business worth about £3.5bn, with sales approaching £12bn, and it has been estimated synergies could lead to £270m of savings.

But Carphone group chief executive Andrew Harrison told Retail Week another attraction of a merger would be the opportunity to capitalise on the trend of connecting smartphones to other electronic devices, which Dixons sells.

Harrison said: “Whether it’s changing your heating or sending information to your car, we are all aware of the changes in technology and the part smartphones play.”

Harrison said Carphone’s tie-up with Best Buy in the US – which has ended but was seen as a success – and its shop-in-shop partnership with Makro and Media-Saturn in Europe, showed that Carphone’s offer complements that of consumer electronics retailers.

But Harrison said there remains “a lot of work to do” before any deal is reached.

It is expected Carphone would replace the 153 Phones4U shop-in-shops in Dixons’ stores.

The possible merger comes as white goods etailer Ao.com sent shockwaves through the City when it made its debut on the London Stock Exchange on Wednesday. Shares rocketed from 285p on opening, when it was valued at £1.2bn – the UK’s biggest-ever online retail IPO.