Sales at John Lewis department stores rose 4.6% year on year to £71.5m after a strong start to the week. 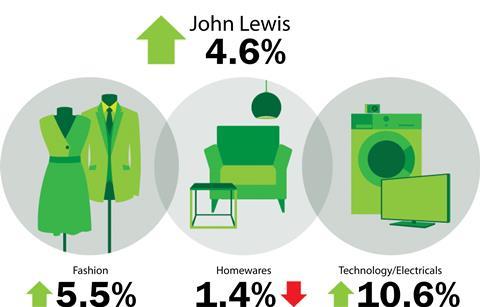 John Lewis described the period to June 14 as “a week of two halves”. After a strong start, there was a slowdown in the later part of the week during sunny weather.

Electricals and technology was the strongest performing category, up by 10.6%. There was strong demand for cooling products and audio.

Fashion sales advanced by 5.5% but the home category was down by 1.4%.

Online revenues increased by 21% and there was a 46% rise in click-and-collect sales.

Footfall in stores was “slightly lower than previous weeks”. The top performing shops were High Wycombe, up 21%, and Tamworth, up 20%.

John Lewis retail services director Barry Matheson said: “Looking ahead, we have some fantastic opportunities to come with the promise of more good weather set to deliver continued strong performance of our television, seasonal clothing and outdoor living ranges.”

Sales at John Lewis Partnership stablemate Waitrose rose by 5.2% over the week to £128.6m.

Beer sales rose 50% and barbecue meats were ahead 100%, assisted by the football tournament and the sun.