BHS has launched a #SaveBHS guerrilla marketing campaign, lighting up London landmarks with a giant Union Jack flag in a bid to attract public support. 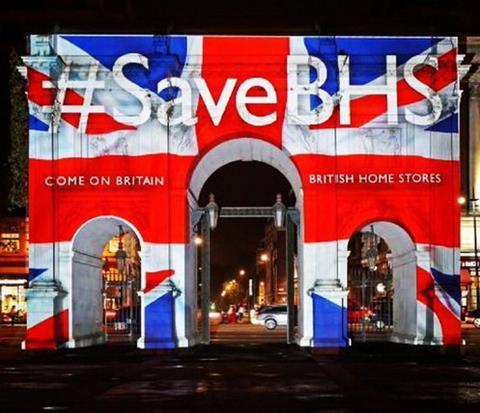 The 100-foot-tall image was projected onto the department store chain’s headquarters on Marylebone Road, as well as on to Marble Arch, Wellington Arch and Blackfriars Bridge.

BHS hopes that the public will back the campaign using its SaveBHS hashtag. The campaign will also be launched in northern England.

BHS, which entered administration in April, said its staff were “keen to rally the backing of the nation to prevent the famous British brand from disappearing from the high street”.

Marketing and creative director Tony Holdway said: “The #SaveBHS campaign speaks on behalf of the 11,000 staff at risk and our millions of customers all over the UK who do not want to see another British institution disappear from the great British high street.

“We have received overwhelming support from staff, customers and suppliers since the announcement. These are people who have shopped with us, worked with or for us, often for many years, and always saw BHS as a permanent fixture on their high street.”

“We ask that everyone join us in support of British Home Stores. Tweet or Instagram us with your messages using #SaveBHS. We do not intend to go down without a fight.

Tunbridge Wells store manager Simon Lamb said: “We all want to get on with the job we are meant to do. It would be accurate to say the Dunkirk spirit has taken over and everyone is getting on with their jobs with dignity.”