December’s retail sales suffered their worst volume growth in seven years, according to the Office for National Statistics (ONS).

Non-food stores suffered the biggest loss with both volume and value sales decreasing 0.6%.

“However, the longer-term picture is one of slowing growth, with increased prices squeezing people’s spending.”

The year in review

Overall, 2017 had the slowest annual growth since 2013 as volume sales grew just 1.9%. The ONS said golden-quarter retail sales would add almost nothing to overall economic growth for the last three months of 2017.

While December sales were poor, November’s retail sales were a bright spot in comparison, growing 4.7% in volume and 1.4% in value. 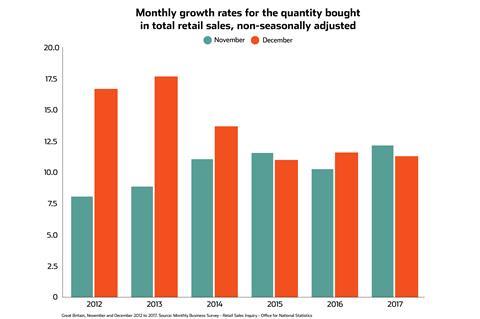 PWC UK consumer markets leader Lisa Hooker added that the outlook for retail was troubled due the annualisation of inflation and a dint in consumer confidence.

“Today’s numbers from the ONS show the UK’s retail sector had a respectable Christmas trading period – with sales just remaining in positive territory.

“However, with the volume of grocery sales starting to decline, it will be hard for the sector to maintain these growth levels as inflation starts to ease.

“Looking ahead, the outlook for retailers remains tough, with muted consumer demand as real incomes are squeezed. Nonetheless, we expect to see both winners and losers in every category of the retail sector.

“Shoppers will gravitate to brands offering a compelling and differentiated proposition, as well as value for money, which will become increasingly important as purse strings are tightened.”