Part of London’s West End was cordoned off this morning after a man broke into the Accessorize store on Regent Street last night and threatened to blow himself up. 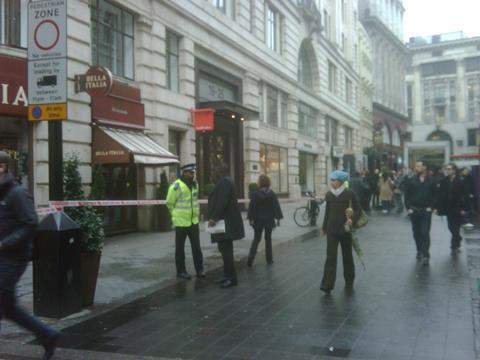 Witnesses, who work in the Regents Arcade House building where the store is situated, said the suspected bomber had scrawled ‘Nail Bomber’ across his front after breaking into the fashion accessories store around midnight.

After a five-hour stand-off the man was arrested.

However, certain exits from Oxford Circus tube station were shut this morning and parts of the area remained closed. Workers at Regents Arcade House were told they would not be able to enter the building until at least 11am.

It is understood the police were searching the rest of the building to rule out the possiblity of any bomb.