B&Q hopes to reinvent the warehouse store by rationalising its offer and introducing same-day click-and-collect within two years. 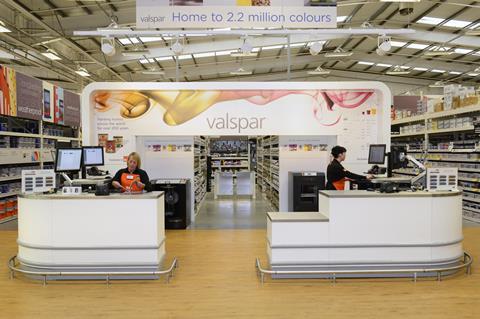 B&Q’s focus on click-and-collect is being supported by a rationalisation of its ranges, which will be reduced in-store and broadened online.

B&Q chief executive Kevin O’Byrne said the company is focused on a “great” click-and-collect offer because “we need to raise our game and embrace the changes digital is bringing”.

Rival Homebase is also attempting to reinvent big-box retailing to become a digital leader as it prepares to close around a quarter of its stores.

As part of plans to bolster multichannel appeal, Homebase customers can pick up click-and-collect orders from Argos stores.

B&Q has begun the rationalisation process with its range of doors, which has moved from around 300 doors being sold in store to around 70, while the online range has been increased to more than 500.

Prior to the process around 46% of the company’s SKUs accounted for 2% of its sales, while 600 of its best-selling SKUs in-store contribute to 24% of sales. The average B&Q store stocks 40,000 SKUs.

Alongside reducing the product range, B&Q is focused on displaying product with a greater authority by removing claims such as “three for two” in favour of a clearer focus on the individual price of products.

B&Q commercial director Darren Blackhurst said that when he joined in January “the essence of being a warehouse had been ripped from the offer and it certainly was not the body language of a warehouse.”

The company’s ecommerce sales are surging from a low base and in the six months ending August 2 they increased by 101% (£17m).

The online sales increase was down to improving the search function and navigation on the ecommerce site.

B&Q has also invested £60m in a new responsive design website, which went live on September 21,  as it aims to capitalise on the surge in mobile shopping.

B&Q estimates around 50% of online sales are incremental rather than cannibalising existing sales, based on the online sales of Screwfix.

The investment in the online offer is being supported by a modernisation of the in-store experience, which includes new technology such as a piece of software called B&Q Spaces.

B&Q claims the software has reduced the time it takes a customer to plan a new kitchen from two hours to four minutes.

Customers can save the designs of the kitchen in-store and play around with them using the technology from home.

B&Q is also considering rolling out its technology to other ranges, such as its bathroom range.

B&Q spaces is currently live in 24 stores and is expected to be live in all stores before peak in January.

Introducing the technological innovation to the kitchens department comes as B&Q commits to withdrawing from yo-yo pricing on kitchen ranges.

O’Byrne said: “It is challenging but we have to hold our nerve and detox, we will come off those sales. The retailer with the healthiest and fastest-growing business is Ikea and it does not do yo -yo pricing.”

B&Q is also seeking to revolutionise the paint-buying experience through the exclusive relationship it has in Europe with US paint brand Valspar.

The retailer is trialling a system that allows customers to colour match a paint against any item.

Once it has been matched against an item such as a handkerchief the sales assistant will create the paint within minutes and the colour tone will be stored on a B&Q database that the customer can access from any B&Q store.