Australian stationery retailer Smiggle is plotting a 250-store assault across the UK with its ‘Willy Wonka’ style offer. 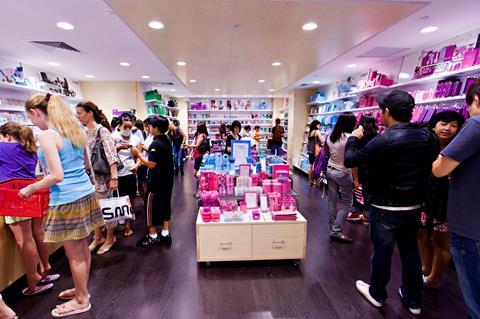 Smiggle, part of the Just Group, which operates 1,000 stores across seven brands in Australia, New Zealand, South Africa and Singapore, is to make its UK debut at Westfield Stratford in London in February.

Smiggle group general manager John Cheston said he hopes to reach the 200-250 store target in four to five years, adding that the UK will “unquestionably” be the stationery retailer’s biggest market globally.

“The UK is compelling in terms of the size and market and competition. There isn’t anyone doing quite what we’re doing,” he said. “Smiggle is a fast fashion stationery proposition, with new product dropping every week.”

Smiggle is aimed at six to 14-year-olds. Products, which are designed in-house, include pencil cases, backpacks, lunch boxes, pens and toys. It has an average selling price of £3.50 and an average transaction value of £15.

Cheston is in the midst of hiring a UK team to lead the expansion, which will primarily focus on prime locations in shopping centres but also on high streets. Stores will average about 1,000 sq ft.

Cheston said: “Landlords like us, we’re a footfall generator. We’re an affordable, discretionary proposition. The timing is opportune, there are some good [property] deals we can do.”

Cheston described Smiggle as a “bit Willy Wonka-ey” with “truly innovative products” and a fun store environment, with light-hearted product demonstrations in shops. “There’s a bit of the Hamleys treatment,” he said.

He added that Smiggle will launch a UK ecommerce operation but that it was not a priority at present.

Smiggle, whose name is a combination of smile and giggle, is a “fun, quirky stationery brand”, according to Cheston.

Smiggle operates 150 stores in Australia, 23 in New Zealand and 17 in Singapore.