Chancellor Philip Hammond has said he is considering a tax on online retailers but steered clear of any pronouncement on business rates.

In his strongest comment yet on the so-called ‘Amazon tax’, Hammond said he wanted to “ensure that taxation is fair between businesses doing business the traditional way and those doing business online”. 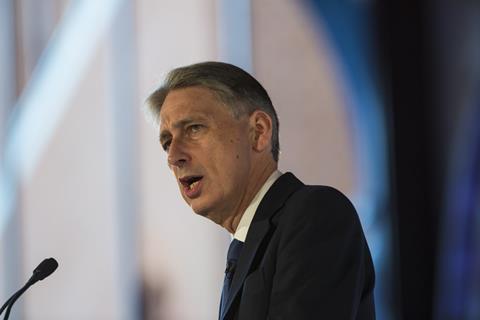 However, he told Sky News such a tax would require negotiating “international tax treaties because many of the big online businesses are international companies”.

When asked what sort of measures he might pursue, Hammond said: “The EU has been talking about a tax on online platform businesses based on value generated. That’s certainly something we’d be prepared to consider.”

The chancellor did not address the thorny issue of business rates, which has contributed to the collapse of multiple retailers over the past year, including House of Fraser tumbling into administration this morning.

He did concede that while he was pleased with Friday’s 0.4% GDP growth figure, Britain’s economy had been weakened by the Brexit vote.

“Clearly that uncertainty is having a depressing effect on the economy,” he said, claiming that the Chequers deal was the “best way forward”.

He said: “It will allow us to deliver on the result of the referendum, taking back control of our immigration, allowing us to develop our own trade policy and ending the sending of money to Brussels every year.

“Doing a deal like Chequers will probably allow the economy to grow at broadly the same rate as inside.

“You will not have quite the same amount of access to the EU but we will have the freedom to develop relations with countries outside the EU.”