Nike is one of the world’s largest footwear and apparel manufacturer which was founded in 1964 by Bill Bowerman and chairman emeritus Phil Knight. The brand retails products under its own name, as well as Jordan, Skateboarding, Converse and Hurley. Nike also creates highly sought-after product releases through collaborations with musicians and high fashion brands such as Commes Des Garcon. 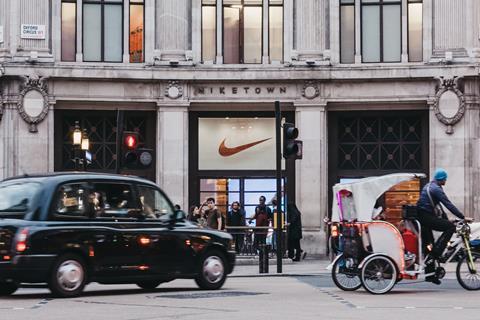 Nike’s revenue is mostly made from wholesaling its products to sports and fashion retailers, however it announced its ‘consumer direct offense’ in 2017 which set out its aims to grow its direct-to-consumer business to account for 50% of sales by 2022 –currently 35%. The brand believes this will provide it with a profitability boost and give it better control over distribution.

Part of this strategy saw Nike acquire data and computer vision firms to better understand its customer, as well as pulling its products from the Amazon marketplace as it was unable to offer the level of customer experience it desired. It also revealed it would end supply with independent retailers during 2021 as this “no longer aligned” with its distribution strategy.

Nike also operates a number of apps which aim to support athletes with training tracking and customers with AR-powered footwear sizing, as well as its transactional SNKRS app which is used to launch highly sought-after and limited release products to its growing ‘hypebeast’ brand-loyal customers.

Nike experienced total revenues of around £29.2bn, down 4.9%, with pre-tax margins falling 2.6 points to 7.7% for 2020. The brand does not provide UK-specific figures and instead refers to its European subsidiary, Nike BV, which reported sales of £8.3bn in the same year. Its three major markets are the United States, China and the United Kingdom.