Ikea is one of the world’s largest furniture retailers with around 465 stores across 63 markets, many of which operate as franchise stores. It has a successful business model focused on offering stylish flat-pack furniture at affordable prices, with a strong emphasis on cost management across the business. 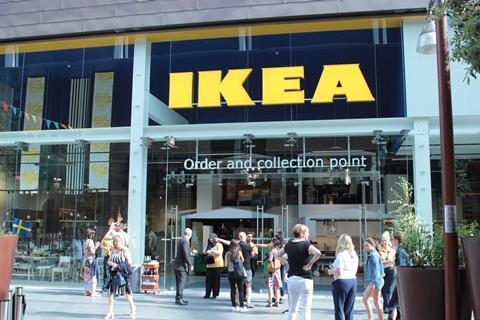 The retailer trades through just over 20 UK stores, with the majority adopting its traditional big-box format and a handful in its urban formats. More recently expansion has shifted to its smaller city formats and online as the retailer recognises changing consumer behaviour.

A similar branch is set to open on Oxford Street in autumn 2023 after Ikea struck a £378m deal to acquire the former Topshop flagship store at Oxford Circus.

Ikea has also been aiming to further develop its consumer product range, particularly around smart home, and increase the automation of production and supply chain processes. At the same time, it is expanding its Taskrabbit installation services in existing and into new markets.

UK sales have grown robustly in recent years but in a challenging 2020 financial year impacted by the pandemic, sales declined 10.2% to £1.9bn. However, online performed strongly as stores were transformed into fulfilment centres, and accounted for 27% of total sales. The retailer has not yet released its 2021 UK financials; however, these should become available later this year.

Allowing for currency fluctuations, Ikea’s largest franchisee, Ingka Group, experienced a revenue increase of 3.1% to €39.8bn (£34.2bn) in the 2021 financial year. Online sales accounted for 20% of total sales during the year, up from 18% in the previous year.