Arcadia boss Sir Philip Green has opened the retailer’s work experience scheme to entries for the second year with the backing of entertainment mogul Simon Cowell. 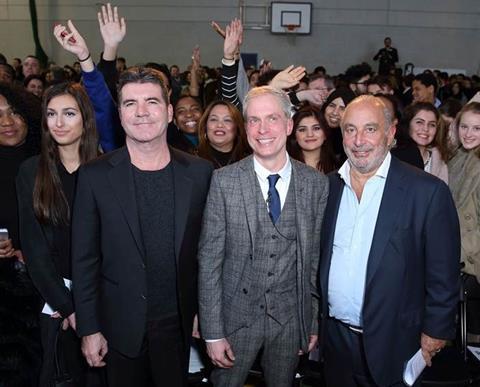 The initiative, in which school students compete for places and in return gain in-depth experience at Arcadia departments ranging from legal to digital, is designed to benefit students whether they want to go into further education or straight to work.

Green and Cowell emphasised the importance of being able to deal with people directly rather than virtually, as well as advising more widely about how to make the most of opportunities and prepare for the world of work.

Both emphasised the importance in business and life of face-to-face impressions, while acknowledging the rise of social media and associated commercial opportunity.

Green, famous for his attachment to his old-fashioned Nokia mobile phone, said: “I do worry about all these gadgets everybody’s on 24 hours a day.

“Spend some time talking to each other. I like to see people engaging. You can send eight texts to do something that would have taken 10 seconds on the phone.”

Cowell said: “I’m with Philip. I hate emails. I don’t even particularly like texting. It used to be ‘how r u?’ but now it’s more like letters.

This year’s Arcadia programme was unveiled at London’s Highgate School, through which it is co-ordinated and extended to another 34 schools.

About 800 students attended the launch of the scheme and were encouraged to apply.

Students who took part in the Arcadia scheme last year spoke eloquently about how much they had learned.

The retailer is offering 50 two-week work placements this year and 200 students will benefit from masterclasses on work skills.