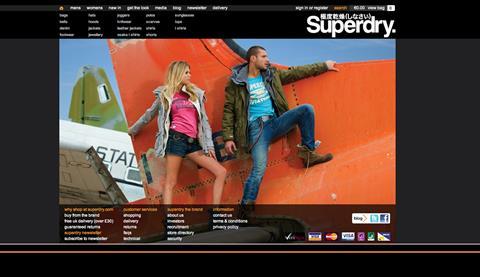 The recently floated retailer has also appointed Chris Griffin, who ran the seconds operation as a sole trader through his 888 Clothing business, as head of ecommerce and expects the changes to improve its etail operations.

888 Clothing had been selling Superdry seconds - damaged or returned goods - since September last year and subsequently rose to become the top UK eBay seller of clothes, shoes and accessories. The move in-house - for a settlement of £500,000 in lieu of termination notice, which will be paid in shares - is expected to lift profitability.

He said: “This will ensure that we are better placed to maximise our internet sales and drive profitability. Chris’s track record and understanding of ecommerce are a great boost to SuperGroup.”

Singer analyst Matthew McEachran said: “By bringing in Griffin, who has a great track record, it will upscale its ecommerce. A lot of businesses are ahead of it in terms of ecommerce, so this will give it the focus it has not had.”

“Griffin will bring a new impetus, we believe, to the development of the brand on the internet, both in the home market and overseas. He is expected to make improvements to the functionality of the website over the next quarter with respect to delivery schedules, affiliate marketing and checkout speeds.”

He said: “In view of the outlook for online growth in retailing, this forecast could prove conservative.”

McEachran, who visited the retailer on Monday, also said he was impressed by the quality of its products. “The product has clearly always been popular but the feeling is that it is getting better, with improvements in the fabric and detail,” he said.

SuperGroup, founded in 1985, floated in March and last month entered the FTSE 250 index.