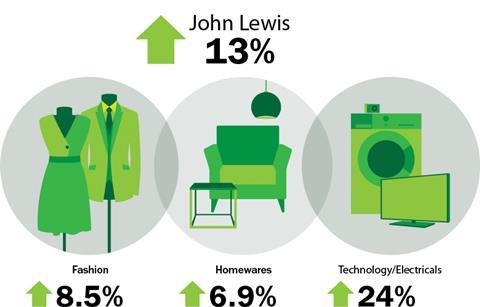 The department store, which had previously suffered two weeks of decline as the hot spell kept shoppers away, said that due to the cooler weather “customers found an increased appetite to visit our stores and online proposition”.

Sales on Johnlewis.com jumped 24.7%, with click and collect driving growth across fashion, home and electricals.

Home achieved the best sales rebound last week, with sales up 6.9% across both stores and online, driven in particular by cooking and dining. This compares with a 10% slump the week before.

Fashion sales were up 8.5%, driven by “the continued good weather supporting sales of high summer lines and customers starting to react to transitional and autumn/winter stock”, according to Dino Rocos, operations director at John Lewis. The category was up against tough comparables – this time last year Olympic sales were driving trade, Rocos said. Last week girlswear performed particularly strongly, while new season stock across brands such as Phase Eight, Mint Velvet and Somerset by Alice Temperley also “started well”.

Swindon, Milton Keynes and Cardiff were the best performing stores for John Lewis.