Department store group John Lewis’ sales jumped 6.7% to £80.7m in the week to June 29 as shoppers rushed to get a bargain in its summer Sale. 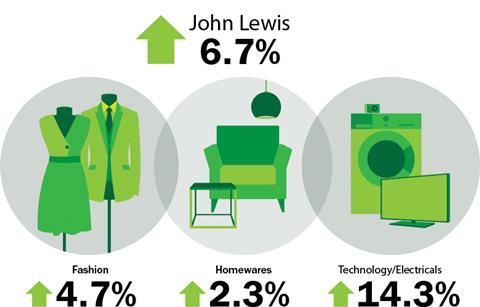 Home sales edged up 2.3% driven by its Clearance event, with Sale items soaring 38% year on year.

Fashion revenue advanced 4.7%. Reduced items accounted for almost half of sales. Nursery had a particularly good week, according to John Lewis, as various events were held in store alongside a marketing campaign.

Sales were also bolstered by the sunshine, which prompted a run on suncare and sunglasses, which rocketed 76% on last year.

Sales at JohnLewis.com jumped 20.2% over the week.

Andy Murray’s progression in Wimbledon helped drive sales increases in strawberries, up 56%, Champagne, up 26%, and Pimm’s, which soared 90%.

The bumper weekend of sport, which included the T20 cricket series, the British Grand Prix and the British Lions match, led to beer sales rising 25% and cider increasing 14% at Waitrose.

The sunshine also provided a boost as meat sales soared 50% and charcoal 30% on last year as barbecues were fired up.