Retailers in London’s West End are preparing an emergency “six-figure” advertising campaign to try to lure shoppers back during the Olympics. 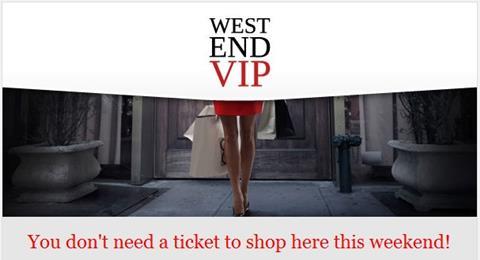 New West End Company chief executive Richard Dickinson told The Guardian: “We are going to see what we can do to get people coming back into the centre.”

NWEC has been sending out emails to consumers signed up to its marketing communications, telling would-be shoppers: “You don’t need a ticket to shop here this weekend!” (see above).

Many Londoners have been working from home during the big event while they take heed of TfL warnings to avoid travel “hot spots”, which has led to footfall crashing in the West End.

However, luxury retailers on Bond Street are doing well, according to Dickinson.

New figures from data specialist Springboard showed shopper numbers plummeted 21% in London over the opening weekend of The Games and more than 9% nationwide.

To add to the woe, Londn 2012 organisers will restrict access to Westfield Stratford City to non-Olympic attendees from 10.30am to 5pm today and tomorrow, as revealed by Retail-Week.com.