The volume of grocery items sold increased for the fifth consecutive month year on year in April but falling food prices drove sales value down. 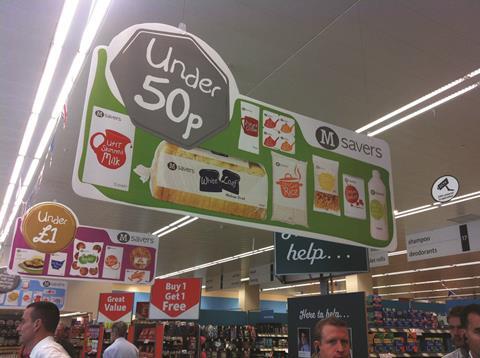 Sales volumes increased 0.4% year on year during the four weeks to April 25 despite sales falling at all the big four, according to Nielsen figures.

However, food prices falling for the fourth consecutive month led to sales value during the month dropping 1.2% year on year.

Nielsen UK head of retailer and business insight Mike Watkins said: “Food deflation and falling spend-per-visit are the biggest challenges facing UK supermarkets. Although retailer price wars are contributing to sustainable growth in the amount people buy, price is still less of a differentiator for building loyalty to a supermarket, than the overall store and shopper experience.”

Nielsen said promotions increased to 34% of sales during the period, but were succeeding in driving incremental spend.

Watkins added: “Retailers will need to work much harder at communicating why shoppers should choose them, beyond just price. Lidl, for example – currently the biggest spender on advertising of the supermarkets – is now focusing more on its quality and fresh food messaging than simply low prices.”

Sainsbury’s recorded the smallest decline in year-on-year sales out of the big four for the 12 weeks ending 25 April as sales dropped 0.1%.

Asda was the largest faller in the big four as sales fell by -2.5%.