Tomorrow’s Black Friday sales bonanza is expected to spark an 11-day frenzy of spending online and across the high street. 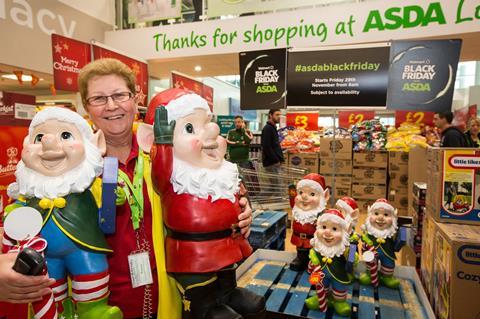 Consumer excitement has risen to such an extent that Asda said it will extend its Black Friday event by a day and other retailers are offering week-long deals. Marks & Spencer expects to despatch more than 1.7 million products ordered on M&S.com next week.

Black Friday, which was first introduced to the UK by etail giant Amazon, is expected to draw record numbers of shoppers. Nearly half of UK shoppers (47%) are expected to make a
grab for cut-price bargains, according to Verdict.

Retail Week and Microsoft research found that 31% of UK shoppers will take advantage of the deals across the high street and online to buy Christmas presents.

Retailers hope that Black Friday will bring in extra sales and kick-start the critical Christmas shopping season. However, Verdict analyst Kate Ormrod warned that this year shoppers are more confident of the discounts on Black Friday “resulting in spend being brought forward”.

Tesco expects Black Friday to topple Boxing Day in terms of sales, while Game will open 316 of its stores from midnight tonight until 3am. The stores will then reopen tomorrow morning and will stay open until midnight.

A wide range of other retailers including Halfords, Debenhams and Holland & Barrett are also offering deals.

US department store Macy’s is attempting to pull in customers from across the pond by offering British shoppers a 20% discount online.