Furniture retailers’ January Sales have got off to an encouraging start as they carry the momentum they built up last year into 2015. 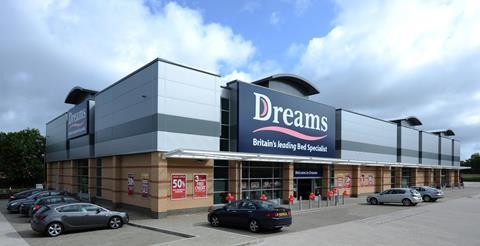 Oak Furniture Land recorded an increase in like-for-like sales of approximately 25% between Boxing Day and January 6.

The retailer’s total sales during the period are up 40% year on year after it launched the SofaStore furniture brand across 57 locations.

He said: “We don’t see Boxing Day as a unique day in itself. We had a very good weekend last weekend and we see the rest of January as being very important.”

Oak Furniture Land has splashed out £12m on advertising throughout its winter Sale campaign.

A third of the budget was spent on promoting SofaStore, which launched on Boxing Day. SofaStore already comprises a quarter of Oak Furniture Land’s total sales, despite it being just a few weeks old.

Figures from retail insights agency Springboard showed that footfall to retail parks, where the majority of furniture retailers are located, was up 2.8% for the week commencing December 28.

That increase came after footfall dropped 5.7% year on year on Boxing Day.

Dreams’ sales were strong during the first full week of trade after Christmas and it recorded double-digit in-store year-on-year sales growth.

Dreams also achieved its biggest ever day of online sales on January 3.

Ning Lee, the founder of furniture etailer Made.com, said that its recent trading has been “very good”. He observed that although it is still early in the sector’s biggest trading period, it was a case of “so far, so good”.

Sofa.com chief executive Gareth Williams said: “Despite the fact that we don’t do Sales, January is traditionally a strong month for us. It goes to show that if you offer consistently good value all year round, customers do respond positively even when the market is riddled with big discounts.”