Sales at upmarket grocer Waitrose jumped 6.2% to £132.2m last week as its new Pick Your Own Offers loyalty scheme started to bear fruit. 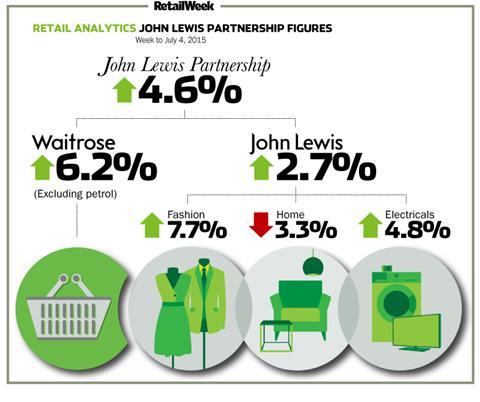 The John Lewis Partnership-owned retailer said good weather, coupled with the British Grand Prix, Wimbledon and a “growing number of myWaitrose customers” signing up to its new offers initiative drove an “encouraging performance” during the week ending July 4.

Pick Your Own Offers, which has been dubbed a “worldwide first” by Waitrose, allows its loyalty card holders to select 10 items from a list of 1,000 lines on which they can save 20% every time they shop in-store or online.

But summer sunshine also aided revenues, particularly in alcohol. Sales of Pimm’s rocketed by what Waitrose called “an incredible” 137%. The grocer recorded “record-breaking” beer sales, with bottled beers up 47%. Rose wines were up 43% and gin sales increased 34%.

Sales of sausages and cooked chicken wings also increased, while barbecue sauce sales rose 60%. Picnic foods including quiche, dips, olives and antipasti all performed well, as the Waitrose delicatessen had its “biggest week ever” outside of Christmas.

Sister retailer John Lewis’s sales rose 2.7% to £88.93m during the same period, in what was the second week of the department store group’s clearance.

Outdoor living proved the “standout performer” as sales jumped by “a stunning” 94% as the outdoor buildings category had its biggest ever year-on-year uplift.

Fashion sales rose 7.7% compared with the same period last year, with the strongest growth in that category coming in women’s swimwear and nightwear, up 29%. Fashion accessories rose 17.6%.

But it was a tougher week for home, as sales dropped 3.3%.