The Co-operative Group is seeking to emerge from the cloud of controversy enshrouding the business as a modern, streamlined company. 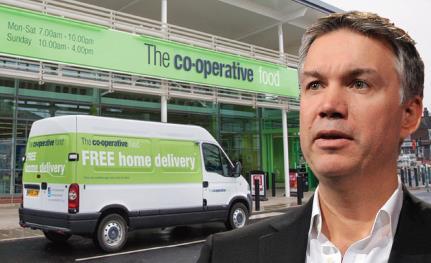 A “root and branch” review, launched on Monday, is understood to be an “open process with no preconditions”, according to a source. The hope is to deliver a modern structure while maintaining the Co-op’s ethical heritage.

Co-op group chief executive Euan Sutherland, who joined in May, is understood to be fighting to reinvent the mutual, which has a complex corporate structure.

A video of Flowers allegedly buying illegal drugs emerged last week and the scandal has engulfed the mutual and shined the spotlight on the Co-op’s ethical credentials and unique corporate structure.

Wardle’s permanent successor is expected to join from outside the organisation. One Co-op source said: “Chairing that business requires someone with a cultural affinity to the Co-op but relevant professional experience to chair a large organisation.”

There is a growing impetus for change within the £13bn mutual. The insider said: “Euan has the mindset for change. There is a demand to reinvent the Co-op, people are frustrated by what has gone on but there’s a keen desire to draw a line under the past.”

Sutherland has been backed by several insiders to lead the transformation.

One former Co-op executive called for a reformation of the group board, at present comprised of elected Co-op members but not the chief executive.

He said: “It has to be done. The only way it will come about is if the regulator puts pressure on the banking unit.”

Co-op group financial officer Richard Pennycook told Retail Week: “There is still a huge relevance to the Co-op and what it stands for.

Chancellor George Osborne ordered an inquiry into the problems at the bank on Wednesday.

Verdict senior analyst Andrew Stevens said: “The real strength Co-op has is its ethical stance. If it can salvage that and make it the foundation from which to re-build a local retail brand then it has a future.

“If membership numbers slide because of everything that has happened, then there is a real risk to the food business as it completely eliminates its one competitive edge over the rest of the grocers.”