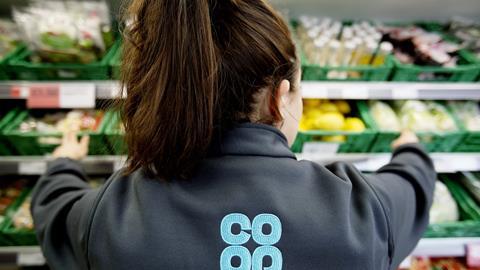 The Co-op has revealed plans to revert back to its clover logo from the 1960s and give £100m a year back to members and local communities.

The 172-year-old group has launched a £1.3bn rebrand of its business.

The Co-operative’s current green fascia will be replaced with a blue cloverleaf logo, similar to that which was first launched in 1968 and abandoned a decade ago.

Speaking at the group’s annual meeting in Manchester on Saturday, chief executive of the food business Steve Murrells said: “The logo will resonate with members that have stuck by The Co-op and with new, younger members.”

He added: “When we moved to a more corporate logo it was probably the right thing back then, but it has become abundantly clear that we do need to go back to our roots.”

The group’s food shops and funeral homes will be rebranded and refurbished, and the insurance business will undergo a systems update.

The transformation process is expected to take between three and five years.

The Co-op also vowed to pay £100m per year to its 8.4 million members and their communities through a rewards scheme designed to retain the loyalty of its existing members and attract new ones.

It aims to recruit 1 million new members over the next five years and generate an additional £3m in benefits for Fairtrade producer communities.

Co-op chief executive Richard Pennycook said: “This is what The Co-op is all about. Big business is often accused of taking money out of communities – we are putting it back in as we champion a better way of doing business for our members and their communities.

“We’re already seeing good momentum across our businesses and this will drive further growth, which our members and their communities will benefit from. It clearly demonstrates The Co-op difference being delivered every day.”

From this autumn, members will receive a 5% reward when they buy a Co-op own-brand product or service. The group said a further 1% will be donated to a local cause of the customer’s choosing.

The changes follow a significant turnaround by the group, which was on the verge of collapse in June 2013 when Pennycook was parachuted in to take over as finance director.

The business had lost a clutch of its senior management and the Treasury Select Committee launched an inquiry into a £1.5bn hole in its balance sheet.

Last month, however, The Co-op reported a 1.6% rise in full-year like-for-likes in its food business and, by way of setting a good example, Pennycook took a 60% pay cut.