Aldi UK managing director of corporate buying Tony Baines is retiring next year after more than 22 years with the business.

Baines, who joined the discounter shortly after it launched in the UK, will step down at the end of 2017.

During his time with the grocer, Baines has played a vital part in growing Aldi’s buying power and building relationships with suppliers, with overall responsibility for sourcing the retailer’s food and non-food products.

He will be replaced by Julie Ashfield, who is being promoted from her current role as group buying director.

Aldi UK and Ireland boss Matthew Barnes said: “We wish Tony a happy and prosperous retirement, and are confident that Julie will continue to build on the fantastic relationships that Tony has established with both our suppliers and our customers.

“Tony has played a key role in our business for over 22 years.

“With more than half of our total sales generated from British-sourced products, and suppliers consistently voting Aldi the best supermarket to do business with, his approach has been hugely influential in enabling us to deliver what our customers want – outstanding quality products at unbeatable prices.”

Baines added: “Helping to develop Aldi into a key player in UK grocery has been a career highlight for me and I’m immensely proud to have worked with some of the most dynamic and committed people in the industry.”

Ashfield – a safe pair of hands 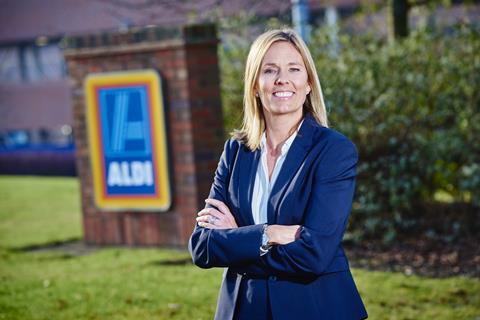 Ashfield is an Aldi lifer, having joined the discounter as an area manager in 1999.

She later joined the buying team and has held the role of group buying director for the past eight years, with responsibility for Aldi’s chilled range.

Ashfield will work alongside Baines next year and take over his role from the start of 2018.