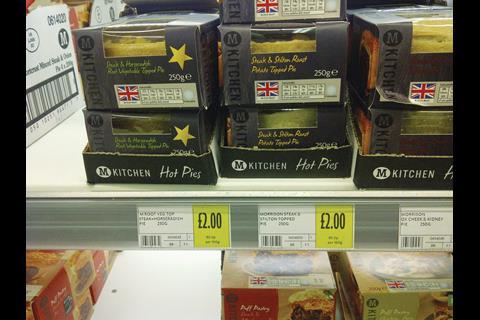 Supermarkets are setting their sights on own-label products to create differentiation and drive margin improvements as they fight for market share.

Grocery giants Morrisons and Asda this week cited private-label brands as a key plank in their future strategies.

Morrisons, which is investing £100m into promotions in the run-up to Christmas, said own-label sales helped drive a 2.4% increase in like-for-like sales excluding fuel in the 13 weeks to October 30. Its own label offer is worth £6bn.

Chief executive Dalton Philips praised Morrisons’ new M Kitchen ready meal range, which launched last month. He said it was “the right thing to do” in the run-up to Christmas. “People cannot afford to eat in restaurants,” he said.

The range, which has triggered a 60% surge in ready meal sales in its first month, was launched with low introductory prices.

Morrisons is also devoting more space in store to M Kitchen through Project Liberate, which aims to free up existing areas for new products and categories. The launch represents the start of a two-year project to boost own-label, headed up by own-brand director Belinda Youngs and head of fresh Jamie Winter.

Meanwhile, Asda is to relaunch its budget range Smart Price in January, with new branding on 400 lines. Further general merchandise products will be rebadged later in the year.

Smart Price launched in 2000 on 600 products and is bought by 43% of shoppers. Asda rebranded its standard food range Chosen By You, which accounts for 40% of food sales, a year ago and is promoting its Extra Special range in the run-up to Christmas.

The move comes as Asda’s wholly owned supplier subsidiary International Produce, based in West Yorkshire, looks to expand its operations to save 10% margin on each own-brand food and drink line it brings in-house to the grocer.

International Produce managing director Nick Scrase said the business was looking to “aggressively expand” over the next five years and could “utilise global leverage” to service Walmart as well as Asda.

Asda reported like-for-likes excluding fuel and VAT were up 1.3% in its third quarter to September 30.

Bank of America Merrill Lynch analyst John Kershaw said: “A strong price image, differentiated fresh offer and lack of exposure to non-food is helping Morrisons outperform today, but with plenty of further initiatives to help sustain growth in the future.”

However, Oriel sounded a note of caution. Analyst Jonathan Pritchard said: “Our view remains that management’s caution on convenience, on non-food and on the move towards web-based retailing will come home to roost here.

“We think that all the growth in the sector on a five-year view will come from these sub-categories and lacking exposure here could be painful.”

Last week Sainsbury’s chief executive Justin King said the majority of product it sells is own-label, and the grocer has seen a move away from branded goods in the downturn.