John Cheston, boss of ‘tween’ stationery retailer Smiggle, has defended its rapid accumulation of stores in the UK. 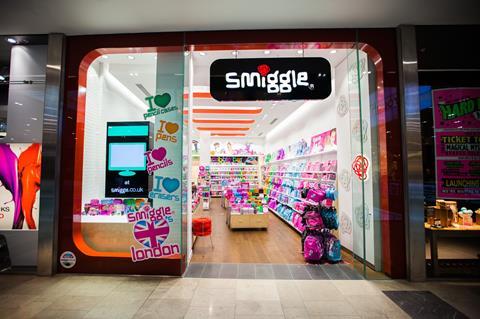 Smiggle’s 90th UK shop is set to open next month

With its 90th UK shop set to open next month in London’s Chelsea, Cheston said: “We’d have only opened this number of stores if business was good; our chairman wouldn’t let us spend the funds if it wasn’t.”

He added: “We never reveal like-for-likes or profits by brand, but I know what they are, and I’m happy.”

Smiggle launched in the UK in 2014 with ambitions to open around 200 stores nationally by 2019.

MMX Retail and Harper Dennis Hobbs are working with the retailer to secure stores across Britain.

On a recent visit to the UK to sign off the next tranche of shops, Cheston told Retail Week the brand is on track to meet this target. But he said he was “not hung up” on opening 200 stores exactly.

Cheston added that Smiggle will “always be committed to bricks-and-mortar stores”, because so much of the product “smells, talks and changes colour”.

He said: “You really need to be in the store to interact with it. Plus, most kids don’t have credit cards, so internet shopping is not that accessible for them.”

The Just Group-owned retailer launched a standalone transactional website in the UK in January 2015.

“It’s all about how you co-exist with online. The smart thing is to get the right number of stores in your estate and complement that with a very good online proposition,” Cheston explained.

The boss of the Australian stationery chain said, however, that he is having second thoughts about rolling out a click-and-collect proposition.

“We trialled click-and-collect in a different brand in Australia and it was not that successful.

“We only have small store rooms in the back of our stores; I don’t have space to be a post office too. So I’m not sure. I may do, but I may not.”

According to Cheston, the outcome of the Brexit vote has had “no impact on consumer confidence at all.”

He said: “One of the great things about our brand is that, even when things like Brexit happen, people still want to do the right thing by their kids.”

The retailer took a “rain-check” after the referendum to monitor and observe trade, but Cheston insisted that, “if anything, business was better”.

Cheston also said Smiggle was unlikely to raise prices in the UK.

Cheston told Retail Week that the retailer, which also trades in Australia, New Zealand, Singapore, Malaysia and Hong Kong, is now “ready to take on another big market”.

He would not be drawn on the particulars but said more detail would follow at Smiggle’s interim results in March.

He added that there is the potential for as many as 5,000 stores worldwide.